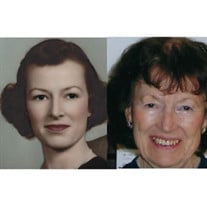 Jewel Schneider, 95, passed away Wednesday, October 20, 2021. She was born September 7, 1926 on a family farm and ranch just Northeast of Sterling Colorado to Wilburn Newton and Jennie Mae (Robirds) Sanders. Allen Dodge Sanders, Jewel’s great-grandfather, moved with his family from Georgia to Oxford, Mississippi in 1843. He married Eliza Albright on December 17, 1849; they had six children. He brought his family to Colorado in the early 1870’s and were some of the earliest settlers in the Sterling/Logan County area. Jewel’s grandfather, William, was 13 years old when they arrived in Colorado. Jewel’s grandmother, Jenona Robuck and her family arrived from Oxford, Mississippi to the Sterling area in the Spring of 1877. Jewel’s father and mother were both born in the Sterling area and were married June 14, 1921. Additionally, Jewel can trace her ancestry to family who fought in the Revolutionary war. Jewel attended Sanders School, which was a three-room country schoolhouse, Sterling (Logan County) High School and then Colorado Women’s College, which is now a part of DU in Denver, Colorado. She worked for JC Penney’s in Findlay, Ohio, Brighton Blade in Brighton, Colorado and retired from Joslin’s department stores in Westminster and Greeley, Colorado in 1989. Jewel married August Schneider May 26, 1946 and was married for 67 years before his passing. She is survived by her children Dan (Diane) Schneider, Nancy Sollee, Cindy (Dick) Gulisano; and grandchildren Tina (Tom) Adams, Kelli (Brad) Shannon, Erika (Nick) Lyons, Jeff (Savannah) Conrad, Chad Conrad, David (Rebecca) Gulisano; and 10 great-grandchildren. She was preceded in death by her grandsons Jonathan Schneider and Daniel Sollee Jr., her husband, August Schneider, and her brother, Wilburn Sanders. She is also survived by her sister, Jenevieve [Manuello] De Soto and her brother, Wendell Sanders. She loved to travel! She and Gus took several trips to Europe and traveled extensively throughout the US and Canada. She loved to camp and hike and fostered the same love of these things in her children and grandchildren. Rocky Mountain National Park and Estes Park were particular favorites for her, and many family memories were made here. Later in life, they enjoyed many years as snowbirds and spent the winters in Apache Junction, Arizona. Jewel would win just about any game that she played with her family; be it card games, Mexican train dominoes, Yahtzee, Park ’n Shop and more. Over the years, so many games were played, and competition was fierce, scores were kept and displayed, and much laughter was always present. She was a faithful member of Trinity Lutheran Church in Greeley, Colorado. She will be buried next to her husband, Gus, in Sterling Colorado. Today, we mourn a mother, grandmother, sister and friend. She will be missed and leaves a hole in our hearts, but we are grateful for her faithfulness to the Lord and rest in the hope that we will see her again. If only we had one more time to say, “Look, it’s a Joslin’s box!” We love you and miss you! Memorial Service to be held in Greeley at Trinity Lutheran Church, 3000 35th Avenue on Saturday, November 13, 2021, at 10:00 a.m. with light refreshments to follow. Interment; Tuesday, November 16th at 11:00 a.m. at Riverside Cemetery in Sterling, Colorado.

The family of Jewel Schneider created this Life Tributes page to make it easy to share your memories.

Send flowers to the Schneider family.