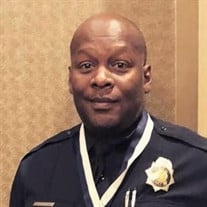 Son, Dad, Husband, Brother, and Friend Jimmy Sheppard III left us too soon to be with God on November 29th, 2021, due to medical complications. Jimmy was born on April 7th, 1974, in Little Rock, Arkansas to parents that adored him, Carolyn D. Sheppard (Gause) and Jimmy Sheppard Jr. His family travelled the world as his father served in the United States Air Force and his mother supported him. Jimmy often talked about his time in Okinawa, Japan as well as Spain and enjoyed the experience of traveling as a kid. It broadened and shaped the view of the world for him. The family moved to the Denver area in 1990 where Jimmy attended Rangeview High School in Aurora, CO. He graduated a semester early and attended the University of Northern Colorado with his beloved sister, Daphne Stephens and brother, Michael Sheppard. While in college he joined Alpha Phi Alpha Fraternity in 1994. He enjoyed stepping with his brother and his frat brothers. He loved making people laugh and he himself has a great one. He graduated in 1997 with a bachelor’s degree in Criminal Justice from the University of Northern Colorado, Greeley where he lived most of his adult life. In 1999 he started his journey as a father and husband with the love of his life, Marlene Amat. Three special beings will love and miss him while cherishing family memories to last a lifetime-Natalia Diane Sheppard (22), Jimmy Sheppard-Amat IV (20) and Jean Paul Sheppard (16). Jimmy’s legacy will shine through their contributions in life. With his family, he was a longtime member of St. Mary Catholic Church where he joined the catholic faith. Shortly after college, Jimmy worked for the City and County of Denver as a case manager for the Safety City Program. He also received his Paralegal certificate and decided to attend the Peace Officer Academy through Aims Community College. He joined the Brighton Police Department in 2004 and started his journey as a Police Officer. Not only did he make lifelong friendships but also provided stellar service to the community. He was an over achiever with his work and a day was never wasted. He was commemorated for his hard work often but most meaningful were the times when he provided kindness to people he encountered. Hearing those stories were the best. In 2013 Jimmy transferred to the Denver Police Department and started that journey in District 5. He continued to make lasting friendships and was a member of the IMPACT Team. In April of 2018 he was honored as a Denver Police Hero for his act of courage and professionalism during a difficult situation. In 2019 he became a detective. Jimmy is described as a “great cop, hard worker, solid cop, team player, smart, a hero”. The weight and sacrifice of being a police officer also came with stories of brotherhood and friendship that Jimmy valued so much. Jimmy will be joining in heaven his grandmother “Dear” Emma Robinson, Grandfather Jimmy Shepard, Grandfather Sammuel Gause, and his Grandmother Rosalie Shepard (Stevens). Family that will also miss him include nieces and nephews, DJ Stephens (20), Jillian Stephens (17), Aniya Sheppard (20), Anyae Sheppard (20) and Michael Derae Sheppard (22) as well as brother-in-law Derek Stephens and sister-in-law Nicole Sheppard. Mother-in-law, Myrna Elliott, father-in-law, Octavio Amat, sister-in-law, Geraldine Amat and her husband Jose De la Venta, brother-in-law Octavio Amat Jr. and sister-in-law Mireille Elliott as well as many loved cousins, aunts and uncles honor his memory. A mass and celebration of a life well lived will take place on 12/9/2021 at 11:00 AM at St. Mary Catholic Church. Visitation Hours will be on 12/8/2021 from 4:00 PM to 7:00 PM at Moser Funeral Home. A rosary will be recited in his honor starting at 6:00 PM.

Son, Dad, Husband, Brother, and Friend Jimmy Sheppard III left us too soon to be with God on November 29th, 2021, due to medical complications. Jimmy was born on April 7th, 1974, in Little Rock, Arkansas to parents that adored him, Carolyn... View Obituary & Service Information

The family of Jimmy Sheppard III created this Life Tributes page to make it easy to share your memories.

Send flowers to the Sheppard family.