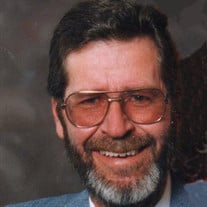 John Raymond “J.R.” Hansen, 77, was born March 11, 1941 in Albert Lea, Minnesota to James and Clarice (Jorgenson) Hansen, and passed from this life on March 22, 2018 at his home in LaSalle, Colorado. J.R. was a long-haul truck driver most of his life. He enjoyed auto races, mowing on his tractor, having coffee with the guys at the truck stop, hobnobbing in general, and was an avid reader. On January 11, 1997, he married Dianne S. Johnson in Greeley, Colorado. They enjoyed many trips in their 5th wheel over the years and spent several winters in Arizona. J.R. leaves behind his wife, Dianne S. Hansen; son Joel R. (Katie) Hansen of Eaton; daughters Daun R. (Jim) Egli of Broomfield, and Rachelle M. (Dave) Beal of Loveland; grandsons Jace Hansen, Jodin Hansen, Miles Morgan, Alex Morgan, and great-grandson Kayne Morgan. He is also survived by brothers James Hansen, Harold (Geri) Hansen and brother-in-law John Weisser. He was predeceased by his parents, sister Janice Weisser, sister-in-law Joy Hansen, and best friend Jessie. J.R. did not want any formal service but would probably not object to a beer being raised in his memory. An online guestbook and obituary are available at www.moserfuneralservice.com.

The family of John Raymond Hansen created this Life Tributes page to make it easy to share your memories.

Send flowers to the Hansen family.