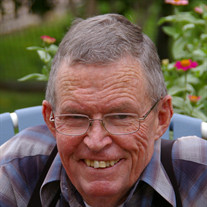 John Leslie (Les) Hill, 78, of Ault passed away after a short illness at NCMC in Greeley on August 7th, 2017. Les was born Feb. 26, 1939, in Collbran, Colorado, to John Hill and Josephine Severson Hill. He grew up on the family ranch, graduating from Plateau Valley High School in 1957. He was very active in FFA achieving his state farmer’s degree and served as a state officer. He attended Colorado State University for two years. From 1960 - 1964 he served in the United States Marine Corps as an electronics technician with the 2nd Marine Air Wing in Beaufort, South Carolina. Les married Sharon West in Collbran in 1960. Upon his military discharge they returned to Collbran where they raised their family and ranched for the next forty years. He was very active in the community serving on the Mesa County FSA committee, FmHA loan committee, Mesa County Fair Board and secretary of the Mesa County Farm Bureau. He was a long time member of the Plateau Valley Stockgrowers, Colorado Cattlemen and the National Cattlemen’s Associations. He worked several years as the store manager for the Fruita Consumers Co-op in Plateau City and a loan officer for Rifle Production Credit Association. He was a lifelong member of the Collbran Congregational Church. Les owned registered Hereford cattle for over 50 years. He sold bulls through the 4 Corners BCIA in Hesperus, CO, and the Western Colorado Bull Test in Delta, CO. In 1977 He showed the reserve champion pen of Hereford feeder steers at the Arizona National. He was very interested in local water rights and served on numerous ditch and reservoir boards. Family was always very important to him and he was very proud that all three children graduated from college. His grandchildren were the love of his life and there was nothing he wouldn’t do for them. He enjoyed music of all kinds, especially the “old” country music, and passed on his musical abilities to his children. Upon retirement in 2005 they moved to Ault, CO, to watch their granddaughters grow up and made many trips to Arizona to see their grandson. Les loved driving around Weld County and saw how easy it is to farm compared to the Plateau Valley. The highlight of his day was going to breakfast every morning and visiting with the local farmers and ranchers exchanging many stories. He loved people and remembered so much about everyone he met. Les is survived by his wife Sharon, a son Leonard (Darlene) Hill of Scottsdale, AZ; a daughter Lesli (Rodney) Anderson of Ault, CO; daughter-in-law Elaine (Wendell) Cheek of Coeur d’Alene, ID; granddaughters Charlotte Anderson of Overland Park, KS. and Lona Anderson of Ault, CO; grandson Zander Hill of Scottsdale, AZ; sister Joann Freedman of Lakewood, CO; three brothers, Allen (Lita) Hill and Ernie (Shannon) Hill of Collbran, CO. and Randy (Cindy) Hill of Paradise, UT. He was preceded in death by his parents, a son Zack and a brother-in-law Dave Freedman. In lieu of flowers donations may be made in his memory to the First Congregational Church of Eaton/Ault Building Fund 325 2nd St., Eaton CO 80615 or to the Collbran Congregational Church, P O Box 160, Collbran, CO 81624. Cremation has taken place. Memorial services will be held at the First Congregational Church in Eaton on Friday, August 11th at 10:30 am, the Collbran Congregational Church in Collbran on Saturday, September 9th at 10:30 am. An online obituary and condolences may be viewed at www.moserfuneralservice.com.

John Leslie (Les) Hill, 78, of Ault passed away after a short illness at NCMC in Greeley on August 7th, 2017. Les was born Feb. 26, 1939, in Collbran, Colorado, to John Hill and Josephine Severson Hill. He grew up on the family ranch, graduating... View Obituary & Service Information

The family of John Leslie "Les" Hill created this Life Tributes page to make it easy to share your memories.