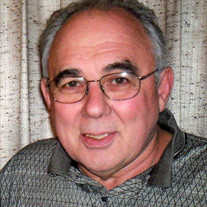 John Thomas Shinkle, 76, of Greeley, passed away April 6, 2020 from heart and kidney illness at North Colorado Medical Center. He was born November 12, 1944 to Elsie (Hawkins) and Redin Shinkle in Chillicothe, Missouri. John attended local schools and graduated from High School. In 1966, he joined the United States Army where he was a sharpshooter and aircraft maintenance for around 3 years. Rank at the time was PVT E1. In 1975, John moved to Greeley, Colorado where he attended and graduated from UNC with a teaching degree. He ended up teaching Industrial Arts at Heath Jr. High. On April 1984, he married LaVeta Rodgers in Las Vegas, Nevada. During this time John was employed with Union Pacific as a track worker. He also painted bridges for Big R Manufacturing with Gary Miller. He also dabbled in coin trading and collecting, bought and sold antique guns, and gold jewelry. He was a member of the American Legion and the Sons of Confederate Veterans. John had tall stories to tell especially when he got together with friends. He also talked about his girls (April & Lacy) on how he enjoyed his time with them. The past few years of John’s life were a struggle with dementia leaving his wife as caregiver. John leaves behind his wife, LaVeta Shinkle, 2 brothers, Jim of Missouri, and Mark of Loveland, a sister, Mary Smith also of Missouri, a daughter from a former marriage, Malina of Ohio, a granddaughter, Lacy, stepchildren, April, Cory, and wife, Dalene. He was proceeded in death by his parents, and an aunt, Elma of Missouri. Memorial services will be 1:00 p.m. on Saturday, August 22, 2020 at the Moser Funeral Service Chapel, 3501 S. 11th Avenue in Evans, Colorado. Inurnment at Sunset Memorial Gardens.

The family of John Thomas Shinkle created this Life Tributes page to make it easy to share your memories.

Send flowers to the Shinkle family.