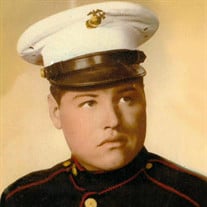 Johnny Martinez son of Guillermo and Manuela Sanchez passed away Monday, June 1, 2020 in Fort Collins, Colorado. Johnny was born on February 9, 1950, in Greeley, Colorado. He lived for 70 years and was one of 10 siblings. The family moved to Petersburg, Texas where he attended school and was a member of the football team. The family then moved to Petersburg, Michigan where he also participated in school sports. Before graduating from high school, he enlisted in the Marine Corp at the age of 17. After graduating from Petersburg High School, he became a member of the 1st Battalion for the state of Michigan and was stationed at Camp Pendleton in San Diego, California for boot camp. He earned the rank of Lance Corporal and after serving two tours in Vietnam, he left the service and moved to Colorado. He met the love of his life --Carol Halfpap of Fort Collins, his wife of 45 years--while employed at Eastman Kodak, Colorado division in Windsor, Colorado where he worked for 33 years. He had a special place in his heart for his fellow combat vets whom he shared the love for his motorcycle, a Harley--to him the only “real” motorcycle. The family is honored and grateful for your service and for your friendship with him. Johnny will be missed by countless friends, co-workers, neighbors, church members, service techs, doctors, nurses…etc. If he teased, you…then I guess that meant you were family. We know he enjoyed watching you squirm a little which could be a little intimidating, but deep down inside he was a big teddy bear. He was all heart which is best summed up by the following condolences our family received… “Rebel was a great man. He had a big heart and I respected and looked up to him. When I was a mere 19, he made sure I had a safe place to live. Him and Carol opened their hearts and home to me. He taught me what it was like to be cared about and how I could accomplish anything, and he always had my side. He was a very special person in my life. I hope he knew what a great impact he had on me. Truly a good soul and dear friend…Please give Grandma a huge hug and kiss for us.” As is so apparent, Johnny chose a way of life that left us with some cherished memories. Johnny’s support system not only included special relationships with family, like his Uncles & Aunts, his younger and older cousins; nephews & nieces, but one that was filled with friends that he treated like family—that’s who he was—a Hero, a Son, a Brother, a Cousin, a Friend. We each had our own special bond, and we love him and will miss our “Rebel” dearly—Semper Fi. Johnny is preceded in death by his father, Guillermo Sanchez and his sister, Magda Rodriguez. He is survived by his wife, Carol Martinez, mother, Manuela Sanchez of Eaton, Colorado, siblings: Loretta Tostado of Round Rock, TX; Balbina Sanchez of Eaton, CO; Yvonne Sanchez of Greeley, CO; Yolanda Sanchez of Pflugerville, TX; Guillermo Sanchez Jr. of Ardmore, OK; Ruth Myatt of Round Rock, TX; Sarah Centeno of Round Rock, TX; and Elena Rhodes of Abilene, TX. He had 34 nieces and nephews, numerous Aunts, Uncles, cousins, and extended family & friends who loved him. Memorial contributions may be made to The Wounded Warrior Project, National Kidney Foundation and American Diabetes Association, in care of Moser Funeral Service, 3501 S. 11th Avenue, Evans, Colorado 80620. Visitation will be from 4:00-7:00 p.m., Monday, June 8, 2020 at the Moser Funeral Service Chapel, 3501 S. 11th Ave. in Evans, Colorado. Inurnment will be at Fort Logan National Cemetery. Live streaming of the service will begin at 4:00 p.m.

Johnny Martinez son of Guillermo and Manuela Sanchez passed away Monday, June 1, 2020 in Fort Collins, Colorado. Johnny was born on February 9, 1950, in Greeley, Colorado. He lived for 70 years and was one of 10 siblings. The family moved... View Obituary & Service Information

The family of Johnny Martinez created this Life Tributes page to make it easy to share your memories.

Johnny Martinez son of Guillermo and Manuela Sanchez passed away...

Send flowers to the Martinez family.