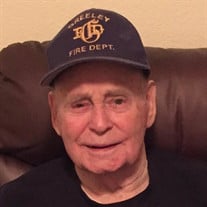 Joseph Clinton Hale Jr., 93, of Greeley, Colorado, passed away on March 2nd, 2019, surrounded by his family. Born in Altoona, Pennsylvania in 1925, he was the son of Joseph and Phoebe Hale. He is survived by his two daughters, Kathy Hale of Greeley, and Linda Shockley (Jesse) of Greeley, his two granddaughters, Kimberly Shultz (Jake) of Greeley, and Kyle Shockley of Waipahu, Hawaii, and by his great grandson, Nathaniel Kupono Donnell of Waipahu. Joe was preceded in death by his wife, Laurene, his parents, and four brothers. Joe joined the Navy at age 17 and served 4 years. He was a 40 millimeter gunner on the light cruiser, USS Mobile, and fought in the Pacific Theater during WWII. While in the Navy he earned his GED. After the Navy, he moved to Greeley, where he met his wife, Laurene Sjoberg. They were married on April 2, 1949, and enjoyed 64 wonderful years together. Joe worked as a mechanic until he joined the Greeley Fire Department in 1957, and retired in 1979, as Captain. If there was something needing fixing, Joe could do it. He was a locksmith, fixed bikes, and worked on lawnmowers and other small machinery. At his passing, he was the oldest retired firefighter in Greeley. Joe was a wonderful father and grandfather and had a great sense of humor. He liked fishing and camping and took his family on many fun trips. He played guitar and harmonica and devoted much of his time playing at the hospital and at nursing homes. He was a member of The Sunshine Band of Greeley. Joe was always helping others and gave of his time freely. Joe will be missed by all who knew him. Family and friends are invited to celebrate Joe’s life at the State Armory Event Center, 614 8th Avenue (Greeley), on Saturday, March 16th, from 2 to 5 pm. In lieu of flowers, donations would be appreciated to the Greeley Firefighters Benevolent Fund. If you'd like to make a donation, please make check to: Greeley Firefighters Local 888, PO Box 62, Greeley, CO 80632, or drop by any Greeley fire station and drop it off in a sealed envelope directed to Local 888. An online guestbook and obituary available at www.moserfuneralservice.com.

Joseph Clinton Hale Jr., 93, of Greeley, Colorado, passed away on March 2nd, 2019, surrounded by his family. Born in Altoona, Pennsylvania in 1925, he was the son of Joseph and Phoebe Hale. He is survived by his two daughters, Kathy Hale... View Obituary & Service Information

The family of Joseph Clinton Hale created this Life Tributes page to make it easy to share your memories.

Send flowers to the Hale family.