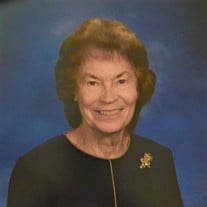 Karen Mable (Van Camp) Brown of Eaton, Colorado passed away on Monday, June 28, 2021, at Garden Square Memory Care in Greeley after a several-year struggle with Alzheimer’s. Karen Brown was born in Franklin, Nebraska on May 9, 1937, to Howard Palmer and Mable Lorene (Roberts) Van Camp. Karen graduated salutatorian from Franklin High School in 1954. Following high school, Karen attended Kearney State College where she graduated with a degree in elementary education in 1956. Before she turned 20 years old, she was teaching fourth grade in Holdrege, Nebraska. She continued to teach school in Holdrege for four years, as well as one year at Maplewood Elementary School in Greeley. Karen married Richard C. Brown on June 7, 1960. Together they had three children: Angela, Dudley, and Carl. Karen was the quintessential mother to these three. She regularly took them on field trips, read to them daily including all the Bible stories, served as “room mother” throughout their elementary days, and cooked and baked for the young family. Most importantly, Karen guided their early spiritual lives. As grandchildren were added to her family, Karen repeated the same experiences with them. She loved them dearly, all nine of them. Karen was a lifelong pianist. By the age of 14 she was playing organ and piano regularly at her church. She continued serving as pianist and organist in every church she attended, from Nebraska to Colorado to South Dakota and back again to Colorado. After giving up teaching to raise a family, Karen taught piano lessons. She continued teaching piano throughout her life until Alzheimer’s brought an end to this beautiful career. Karen left a deep legacy with 100s of piano students over a piano teaching career of nearly 50 years. It was estimated that she taught more than 27,000 hours of piano. Even after she moved into Garden Square Memory Center, she graced the staff and residents with many a song on the piano. Karen was a member of the Evangelical Free Church of Eaton, where, of course, she played piano and organ. She also served in many other capacities. She was also a member of the National Christian Women’s Club and served on their board for many years. Karen is survived by her daughter, Angela Brown-Burchett of Naples, FL; son, Dudley and his wife, Corina, of Greeley; daughter-in-law, Angela Brown (widow of Carl) of Ft Collins; nine grandchildren: Dylan, Tyler, and Blake Burchett; Matthew and Julia Brown; and Janey, Kara (David Kirika), Katherine (Steven Moore), and Isabel Brown; two great grandchildren, Oliver Moore and Zahara Kirika; one sister, Miriam Cowan of Omaha, and many nieces and nephews. Karen was preceded in death by her son, Carl; her husband Dick Brown; her brother Robert Victor Van Camp. A private family burial was held at the Eaton Cemetery. The memorial service will be Friday, September 17 at 11 a.m. at the Evangelical Free Church of Eaton (3rd and Cherry). Memorial gifts can be given to a local non-profit called Network Beyond (PO Box 337626, Greeley, CO 80633-0628) or to the Evangelical Free Church of Eaton, CO (1325 3rd St, Eaton, CO 80615).

Karen Mable (Van Camp) Brown of Eaton, Colorado passed away on Monday, June 28, 2021, at Garden Square Memory Care in Greeley after a several-year struggle with Alzheimer&#8217;s. Karen Brown was born in Franklin, Nebraska on May 9, 1937, to... View Obituary & Service Information

The family of Karen Mable Brown created this Life Tributes page to make it easy to share your memories.

Send flowers to the Brown family.