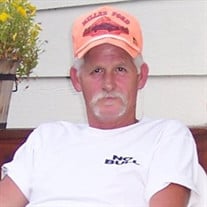 Kelvin E. “Kel” Rogers, 71, of Greeley, passed away on Wednesday, March 30, 2022, at the Westlake Lodge Assisted Living in Greeley. He was born on November 24, 1950, at Eglin Air Force Base, Okaloosa County, Florida to Kenneth and Genevieve (Renford) Rogers. Kel married Joyce (Adkisson) Todd on January 1, 2000, in Greeley. He has lived in Greeley since 1952. His favorite job was when he worked for the Webster FeedLot. After Webster FeedLot was sold, he worked at Greeley Producers where he was injured and had to retire early. He enjoyed fishing, watching professional wrestling and his "Golden Girls". Survivors include his wife, Joyce Todd-Rogers, 2 sons Clansy (17) and Archie (16) who consider him their “Papa'', a step-son David Todd and wife Janelle and 2 grandsons, Brett and Noah, son Randy and grandson of Washington, son Wyatt and wife McKenna and grandchild of Barnesville, a daughter, Marie Price and husband Dustin and grandchild of Sterling, a sister, Frieda Miller of Evans, 2 brothers, Bob Rogers of Wisconsin and Kenneth Rogers Jr. of Greeley, a special aunt, Lela Griffin, and many nieces and nephews from both sides of the family. He is preceded in death by his parents, Genevieve and Kenneth Rogers. A graveside service to celebrate Kel’s life will be held at 11:00 a.m. on Thursday, April 7, 2022, at Sunset Memorial Gardens. A private family visitation was held.

The family of Kelvin E. "Kel" Rogers created this Life Tributes page to make it easy to share your memories.

Send flowers to the Rogers family.