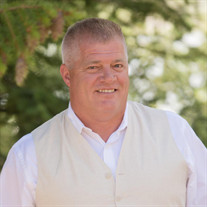 Kevin Scott Hegstad, 57, of Milliken, passed on February 25, 2021, surrounded by family and friends. Kevin was born on April 3, 1963, to Herb and Janice Hegstad of Powers Lake, ND. He attended Powers Lake HS, graduating class of ’81, as well as NDSCS in Wahpeton, where he studied diesel mechanics. On July 8, 1984, Kevin married his high-school sweetheart, Barb (Moen) Schoenthaler. To this union was born two sons – Erik and Justin Hegstad. They later divorced. He then married Sherlyn (Nelson) Hegstad. Kevin led an itinerant life, moving over the years between North Dakota and Colorado. No matter where he was, though, he always attracted an avid following of friends, acquaintances and family. To his many nieces and nephews, he was the fun-loving uncle who always had a laugh on the ready, a four-wheeler for them to ride, a gun for them to shoot. For his friends he was always ready to lend a hand, always ready to make them smile with one of his many stories from a life lived in high gear. For us in his family, we will miss his energy at the table, his mischievous grin, and the feel of his big paws around our necks. Kevin was always ready for the next thing, always ready to embrace the possibilities. Later in life those possibilities brought him to the love of his life, his wife, Sherlyn, whom he married after years of courtship on July 23, 2016. They enjoyed many dreams and life adventures in their beautiful home in Milliken, and his growing list of grandchildren. He also founded the Rocky Mountain Warrior Foundation, a nonprofit organization that through fundraising efforts has distributed thousands of dollars in direct aid to veterans in need and their families. It was in this spirit of giving that on December 6, 2020, he partook in the 35th annual Willie’s Toy Run in Greeley. While in the parade, his motorcycle lost control and crashed, suffering a traumatic brain injury. After a lengthy battle for his life, those injuries proved to be overwhelming. He is survived by his wife, Sherlyn, his parents, Janice and Herb, his siblings, Jeri Nehring, Pam Cote, Tim Hegstad, Jana Zander and Mitch Hegstad, numerous nieces and nephews, his step-children, Curtis and Amber Scott, his children, Erik and Justin Hegstad, and his grandchildren, Tegan Reitsema and Alden, William, Maximus and Tatum Hegstad. A memorial service will be held 1:00 pm on Friday, March 5, 2021 at Journey Christian Church (4754 W. 31 St.) in Greeley. Following the service, there will be a reception at the Moose Lodge in Evans. In lieu of flowers or gifts, the family asks those so inclined to consider a contribution in Kevin’s memory to the Rocky Mountain Warrior Foundation in care of Moser Funeral Service, 3501 S. 11th Avenue in Evans, Colorado 80620.

The family of Kevin Scott Hegstad created this Life Tributes page to make it easy to share your memories.

Send flowers to the Hegstad family.