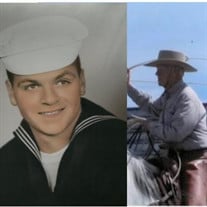 Lanny Carleton Clary of Ault was born to Myrta Lovina (Carleton) Clary and Leslie Robert Clary on Aug 7, 1941 in Greeley, CO. He grew up in Ault and lived in the surrounding area. He attended and graduated from the Ault Public schools where he was active in various activities including football, baseball and track. After high school graduation, he continued his education, attending the Sterling Technology College, Sterling, CO. from 1961 to 1963. Another little known fact is he drove an Ault school bus during his senior year. Lanny was a religious man that claimed no particular church, but in his words referred to himself as a “Free range Christian with a firm belief in God”. He worked on his grandparents farm and at Clary’s Ault Chevron, before entering the US Navy on December 23, 1963 and was honorably separated on December 18, 1967 and was then transferred to reserve status until being honorably discharged on December 22, 1969. Finishing basic at San Diego and Memphis, he was assigned duty as a Ground Support Technician on the air craft carrier USS Independence (CVA-62), where he saw foreign military service in the Gulf of Tonkin, South China Sea, Vietnam. After completing his military service, he returned to Ault to work at Clary Service with his brother Lynn, until retirement. He married Marilyn J. Dinges on July 31, 1976, Lanny was reported to have told Marilyn he was in the oil business to get that first date, he conveniently neglected to expand on this statement to include he changed motor oil at the family service station. On extremely rare occasions would you ever find one without the other one present. Lanny being the kind of guy he was, always remarked he never had to worry about forgetting his wedding anniversary since they were married the same date as the Big Thompson flood. He was an avid Windsor Wizard’s soccer and club soccer fan that seldom missed a game in which his great nephews played. He seldom missed a horse show in which his great niece participated. On occasion he was known to let the referees and judges know when they missed a call or weren’t doing their job. Lanny proudly served on numerous civic and veteran boards in the Weld County area. Among these are the Ault Veterans of Foreign Wars Post 4334, where he was a Life Member, Eaton American Legion Post 26, Ault Library Board, Ault Museum Board, and Ault/Pierce Volunteer Fire Department, Hero’s Expedition, and Qualified Listeners for PTSD veterans, just to name a few. He was one to never turn down service to his fellow man. He proudly served and seldom missed being a member of the Honor Guard for the services of fellow veterans. Lanny received numerous recognition's in his life. One of the proudest was being selected as Parade Marshall for the 2018 annual Ault Fall Festival. Let Lanny slip on his boots, put on his chaps, spurs, that old beat up Stetson, and climb up on a horse and he was definitely in his element. A cattle round up and branding was the best way to get that famous Lanny ear to ear smile. It was an opportunity he never passed up, be it in Colorado or Montana. Ranch activities was the top of or near the top of his favorite past times. Never one to turn down a chance to ride his horse, he participated in the spring and fall cattle round ups and brandings with friends and family locally and in Montana. Many people were fortunate to receive one of the special walking sticks that Lanny enjoyed fashioning from the tree branches he was always scouting about for. He had that special eye to scout out the best future walking sticks. You are hard to define and list all the hobbies Lanny enjoyed. Lanny is survived by his wife of 42 years Marilyn, of the home, brother Lynn(Linda), Severance, CO, sister, Lonetta (Clary) Lesh, Miles City, Mt. and several nieces, nephews; grand nieces, nephews; great grand nieces, nephews, and a multitude of friends. He was preceded in death by his parents, Myrta and Leslie, sisters Lynda and Jeanette, brother-in-law Cleon Lesh and sister-in-law Carol Clary. Unfortunately Agent Orange has claimed another Vietnam era veteran that did not deserve this fate. Lanny and the family request memorials be made to the Ault VFW Post 4334, Ault Northern Plains Public Library, and the Ault Area Historical Museum in lieu of flowers. Graveside Services with full military honors will be at 11:00 AM, June 15, 2019 at the Ault cemetery followed by a fellowship reception at the Ault VFW 4334 hall.

Lanny Carleton Clary of Ault was born to Myrta Lovina (Carleton) Clary and Leslie Robert Clary on Aug 7, 1941 in Greeley, CO. He grew up in Ault and lived in the surrounding area. He attended and graduated from the Ault Public schools where... View Obituary & Service Information

The family of Lanny C. Clary created this Life Tributes page to make it easy to share your memories.

Send flowers to the Clary family.