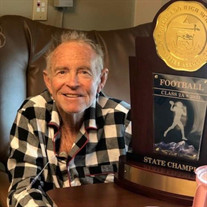 Larry Allan Adams, age 70, of Lucerne Colorado, crossed life’s goal line on Sunday, January 23, 2022 after a courageous six-month battle with pancreatic cancer. Larry was born on September 29, 1951 in Greeley to Robert & Wilma Adams of Lucerne. Larry had the privilege of growing up on his family’s farm and in 1995 was able to return there until his last day. Larry graduated from Eaton High School in 1969 and then went on to earn both his undergraduate and master's degrees from UNC. He married Kayedeane Boyes of Greeley on June 5th, 1976. Larry worked as a Physical Education teacher at Eaton High School from 1979-2005. There he touched the lives of countless students, encouraging them to be the best they could be. Larry lived life to the fullest. Besides family and teaching, he was passionate about his friends, farming, football and faith. Larry’s passion for farming ran deep and he worked tirelessly with his son to create a productive family farm and custom hay business. From April to October, you could find Larry on the farm. Known as “Coach” to most, he exemplified what a true coach is. He loved football, but even more, he loved what he could teach through it: Commitment, Respect, Effort, Discipline, Integrity and Toughness. His impressive coaching career lasted 46 years and began at Arickaree and went on to include Highland, Eaton, University of Northern Colorado, Northridge, Greeley West, Resurrection Christian, and back to his Alma Mater, Eaton. His last four years at Eaton will live on in our hearts forever as Larry helped inspire the Reds to win back to back State Championships. The student athletes that he coached over the years were family to Coach, and he loved and inspired them until his last day. Coach made friends everywhere he went, with genuine concern for all. Even in his final days he made an impact on those he had the opportunity to interact with. Whether it was a waiter, nurse, or a passerby, he would ask them where they were from and would try to make a connection with them. He was able to pick up where he left off with anyone, even if he hadn't seen him/her for a while; always remembering special details about their lives. Family was at the heart of everything Coach did and who he was. Despite his busy schedule, he did his best to make it to the events of his own children and he encouraged them to strive to do their best. When retirement rolled around and he had more free time, his grandchildren became the light of his life. You couldn’t keep “Papa” away, nor could you quiet the laughter when they were together. Coach is survived by his faithful wife (evidenced by 46 football seasons), his son Kurt Adams and his wife Melissa and their 3 sons Aiden (16), Mori (14) and Austin (10) of Eaton; Daughter Jill Burke and her husband Kevin and their 2 daughters Kyla (16) and Ariana (14) of Centennial CO; and daughter and son-in-law Kristen Webb and her husband Josh and their 4 children Kendall (11), Jenna (10), Case (8) and Jack (5). He is also survived by his mother, Wilma Adams of Lucerne and his sister, Maryann Adams of Denver, as well as numerous extended family members who all miss him dearly. A Celebration of Life will be held on January 31st at 1:00pm at the Evangelical Free Church of Eaton, 1325 3rd Street. Memorial gifts can be made to Coach L.A. Football Memorial and those funds will support Eaton Football and athletes.

The family of Larry Allan Adams created this Life Tributes page to make it easy to share your memories.

Send flowers to the Adams family.