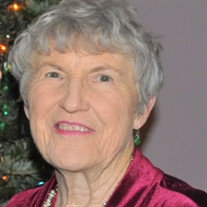 Lenora Bell (Fearn) Collins, age 81, died peacefully at her home in Longmont/Firestone, Colorado on February 3, 2021 from complications with Lewy Body dementia. Lenora was born on August 3, 1939 in Beaver, OK to Oma and Eugene Fearn. She grew up in Hasting, NE where she met her husband, Patrick Collins. Pat and Lenora moved to Los Angeles, CA and married in 1958 where Lenora began her 27-year career with Western Union. Their oldest daughter, Shelley was born there. Pat and Lenora moved to Colorado in 1962. They had 3 more daughters, Stacey, Cathy and Kelley. In 1971 they moved to the Longmont/Firestone area to begin raising and racing greyhounds. Pat and Lenora built a successful racing kennel while raising their daughters. Lenora treasured her family. She started a family reunion for her siblings and their families in 1974 that continues today. She rarely missed any activities her daughters participated in and continued the same support for her grandchildren. She was a fabulous cook and always made special meals for all of her loved ones, whether it be for a special occasion or just a grandchild coming for a visit. She is survived by her husband, Patrick, of Longmont, CO, daughters Shelley Collins of Las Vegas, NV, Stacey (Wayne) Collins Landwehr of Gill, CO, Cathy Collins, of Denver, and Kelley (Mike) Farr, grandchildren, Spencer (Ian) Lash, Jackson Collins, Bailey (Raegan) Landwehr, Quincey Collins, Asher Farr, Eden Farr, and Cainin Farr, sisters June Walburg and Rochelle Ray, and brother, Craig Cooper. Lenora was preceded in death by grandson, Gavin Collins Landwehr, her parents, and siblings; Gary Fearn, Theresa Langlinais, and Sandra Lippincott. Services will be held at St. Peter’s Catholic Church, 915 12th St, Greeley, CO 80631 on Friday, Feb. 12, 2021. The rosary will begin at 9:00 a.m. followed by the funeral mass at 9:30 a.m. The service will be live stream at http://www.moserfuneralservice.com/obituaries/Lenora-Collins-3/#!/TributeWall The interment will follow at Mizpah Cemetery in Platteville, CO. There will be a reception at Z Ranch at 1:00 pm at 29251 County Rd 53 Greeley, CO 80631. In lieu of flowers, donations can be made to The Joshua School at www.joshuaschool.org.

Lenora Bell (Fearn) Collins, age 81, died peacefully at her home in Longmont/Firestone, Colorado on February 3, 2021 from complications with Lewy Body dementia. Lenora was born on August 3, 1939 in Beaver, OK to Oma and Eugene Fearn. She grew... View Obituary & Service Information

The family of Lenora Collins created this Life Tributes page to make it easy to share your memories.

Send flowers to the Collins family.