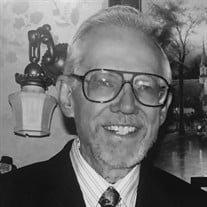 Leo N. O’Connor, 81 of Greeley passed away on Wednesday, January 10, 2018 at Tru Hospice of Northern Colorado. He was born March 8, 1936 to Leo N. & Bess M. (Buttram) O’Connor in Denver, Colorado. He graduated from St. Francis Catholic High School. On June 10, 1967 he married Margaret Anne Schweikert in Denver. They enjoyed 28 years together. She passed on April 4, 1995. He later remarried Patricia Bennetts on February 14, 1997 in Greeley. He resided in Eaton before moving to Greeley in 2017. Leo earned a professional civil engineering license and worked for the Colorado State Highway Department for 36 years. His hobbies included photography and flying radio-controlled air planes. He was a loving husband, father and grandfather and enjoyed spending time with his grandchildren. Leo’s Catholic faith was a very important aspect of his life and he regularly attended St. Mary Catholic Church in Greeley. He is survived by his wife, Patricia O’Connor, a son and his wife, Joseph & Ann O’Connor, a daughter, Kathryn O’Connor, a brother, Dan O’Connor, a sister, Vivian Strimbu, 4 grandchildren, and 3 great-grandchildren. He was preceded in death by his parents, Leo & Bess O’Connor, his first wife, Margaret O’Connor, a brother Robert Scherck, and a sister, Emma Warren. Visitation will be held 4-7:00 p.m. on Monday, January 15, 2018 at the Moser Funeral Service Chapel, 3501 S. 11th Avenue in Evans. Recitation of the Rosary will be 11:00 a.m. on Tuesday, January 16, 2018 with a Mass of Christian Burial to follow at 11:30 all at St. Mary Catholic Church, 2222 23rd Avenue in Greeley. Interment will be at Mt. Olivet Cemetery for immediate family only. Memorial donations may be made to St. Mary Catholic Church in care of Moser’s. An online guestbook and obituary are available at www.moserfuneralservice.com.

The family of Leo N. O'Connor created this Life Tributes page to make it easy to share your memories.

Leo N. O’Connor, 81 of Greeley passed away on Wednesday, January...

Send flowers to the O'Connor family.