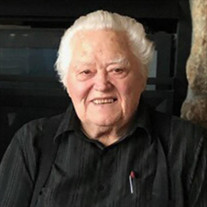 Leonard Kenneth (Ken) Krise, Sr., 81, Briggsdale, Colo., was called home on Saturday, Feb. 20, 2021. Ken was born Dec. 22, 1939, to John Leonard and Lucreshia Rocksanna (Ammerman) Krise in Van Ormer, Pennsylvania. He grew up in the Appalachian Mountains of Pennsylvania the oldest of four boys. In 1960 he moved to Chicago, Ill., to attend Moody Bible Institute. While earning his pastoral studies degree, he met Alice Joyce Sierman. They were married in Chicago on Dec. 21, 1963. He later graduated from Illinois State University with a degree in Education. His joy in life was spending time with his 18 grandchildren, going to their sporting events, putting together puzzles, planting his garden and spending time with his wife of 57 years. Ken was preceded in death by his parents, brother, Paul Krise and sister-in-law, Sue Krise. He is survived by his wife, Joyce; daughter, Tamara (Shad) Clymer of Brewster, Kan., and sons, Leonard (Valerie) and Scott (Heidi) Krise all of Briggsdale; brothers, Rudy (Sandra) Krise of East Freedom, Penn., and Lee (Carrie) Krise of Pottstown, Penn.; aunt, Agnes Krise, Dysart, Penn.; sisters-in-law, Verda Ball and Mabel Baxter of Briggsdale, Margaret Peterson of Eaton and Marian Sierman of Grover; 18 grandchildren, three great-grandchildren; and many nieces, nephews and cousins. Visitation will be held Friday, Feb. 26, 2021 from 5 to 7 p.m. at Moser Funeral Home in Evans. The Celebration of Life will be held Sunday, Feb. 28, 2021 at 2 p.m. at Briggsdale High School in Briggsdale. Interment will be held at Briggsdale Cemetery following the service. In lieu of flowers, the family asks friends to consider donating to the Ken and Joyce Krise Scholarship Fund in care of Briggsdale School.

The family of Leonard Kenneth Krise created this Life Tributes page to make it easy to share your memories.

Send flowers to the Krise family.