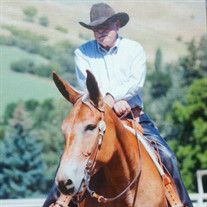 Leroy Dale Williams, 78, of Eaton, passed away on Sunday, February 20, 2022, at his home. He was born January 13, 1944, in Parkersburg, West Virginia to Roy Henry & Pauline (Dutton) Williams. Leroy attended Aberdeen High School in Maryland where he enjoyed playing baritone and drums. He graduated in June of 1961. Following his graduation, he drove a truck for Aberdeen Cleaners for a short period of time before going to work for American Cyanamid Company where he worked as a traffic manager. Leroy married Wilma Lyn Horton on September 8, 1962, in Havre De Grace, Maryland. His true calling came when he went to work for Triple Crown Pharmaceuticals as a sales representative for more than 20 years. The rest of his career was spent working in equine pharmaceuticals where he had his own company, Contract Veterinary Sales. His passions and hobbies were horses and mules. As a young man, he trained and showed and as his family grew, he passed this passion on to all of his children who grew up riding. He loved spending time with family and friends and planned many a family vacation. Leroy is survived by his wife, Wilma Williams of Eaton, two daughter, Deb Williams of Denver, and Jennifer (Vince) Untiedt of Eaton, one son, Ron (Mary Lee) Williams of Odebolt, Iowa, grandchildren, Heather, Stefanie and Conner Untiedt of Eaton, and sisters, Louise Ann (Earl) Gullion and Penny Williams. Leroy was preceded in death by his parents, Roy Henry and Pauline (Dutton) Williams and William Joseph and Ruth Ann (Rile) Horton, a brother, Bob Eugene Williams, a son, Kevin Dale Williams, and a sister, Janet Sue (Richard) Durham. There will be a Memorial Open House from 3:00-6:00 p.m. on Friday, March 11, 2022, at the Moser Funeral Service Chapel, 3501 S. 11th Ave., in Evans, Colorado. An online guestbook and obituary are available at www.moserfuneralservice.com.

The family of Leroy Dale Williams created this Life Tributes page to make it easy to share your memories.

Leroy Dale Williams, 78, of Eaton, passed away on Sunday, February...

Send flowers to the Williams family.