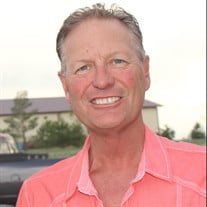 Leslie “Les” Thomas Ball, 53, of Loveland, passed away Friday, October 11, 2019 surrounded by his family. Les was born April 28, 1966, in Greeley to Roland and Verda Ball. He graduated from Briggsdale High School in 1984 where he was a basketball legend. After graduating, he farmed and ranched. He then moved to Greeley where he met and married the love of his life, Vonnie. He later found and mastered his passion and became a successful business owner of L7L Enterprises. He always had a plan and a goal. He loved to travel, go to the ocean and spend time in his barn. Les was a great man! When it comes to him, it was just not words or some cliché. It was absolutely true. What a legacy to leave this world with. Those that knew him would agree, he had the ability to make them better people. He was an inspiration to everyone in his life and will continue to be. He loved and adored his wife and family. Les is survived by his wife, Vonnie; his mother, Verda; his brother, Arland (Terri) Ball; sister, Dorice (Tom) Benson; sister-in-law, Tammie Ball; his children, Lance (Marie) Stark, Kelly Stark (Jim Sara), Joshua (Becky) Ball, Laci (Jeremy) Jacks, Karissa (Christian) Cumberbatch; twelve grandkids; and his loyal dog, Zeek. He was preceded in death by his father, Roland and brother, Leonard Ball. A Celebration of Life Service will be held at 11:00 a.m., Thursday, October 17, 2019 at the Evangelical Free Church of Eaton. A luncheon to follow the service at the church. Interment will be at 2:30 p.m. at Sunset Memorial Gardens in Greeley. Memorial contributions may be made in Les’s name to be designated at a later date.

The family of Leslie "Les" Thomas Ball created this Life Tributes page to make it easy to share your memories.

Send flowers to the Ball family.