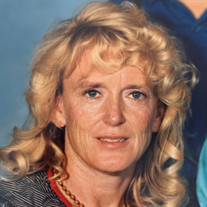 Linda L. Parker, 74, of Evans passed away unexpectedly Monday, January 17, 2022, in Greeley. Linda was born in Sioux City, Iowa on April 27, 1947, to Walter B. And Geraldine R. (Riffle) Casaday where she attended Sioux City public schools. Linda moved to Colorado in 1975 to settle permanently where she ultimately thrived spending time raising her children, making numerous life-long friends, and enjoying the many outdoor adventures she so loved. Linda eventually started her own business as an Antique Dealer, a job well suited to her free-spirited approach to life. Linda was such a devoted mother, grandmother, and great grandmother. She lived her life more by the calendar than the clock, setting her sights on the meaningful and simpler aspects of life rather than the pursuit of material things for herself. She constantly shared her knowledge of little-known facts about people, places, and things often passing along a special gift she had found just for that person during her numerous travels. Linda always thought constantly about the wants and needs of others and keeping those close to her even closer in her heart. Most special about Linda though was her courageous and determined spirit. She was fiercely independent, committed to doing what she believed was right no matter what, and not afraid to take risks. She passed her dogged willpower to her children and their families, and we are all better for having had her in our lives. Linda is survived by three children, Tamala (Gerald) Hartz-McDorman of Estes Park, CO., Brent (Alyssa) Parker of Greeley, CO., and Jennifer (Scott) Simonton of Ocean City, WA.; 10 grandchildren; 7 great grandchildren; siblings, Audrey Waugh of Joplin, MO., Raymond Casaday of Jackson, NE., Don Casaday of Sioux City, IA., Ann (Harold) Auen of Omaha, NE., Carl and Jim Casaday of Sioux City, IA., and Roberta Casaday of Mora, MN, as well as numerous nieces and nephews. She was preceded in death by her parents, Walter and Geraldine Casaday, and her brother Francis Casaday. A Celebration of Life Service will be held at Moser Funeral Home in Evans at 1 p.m., Friday, January 28, 2022.

The family of Linda Lou Parker created this Life Tributes page to make it easy to share your memories.

Send flowers to the Parker family.