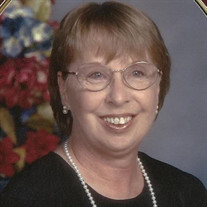 Linda Katherine Stelmack (Iten) of Eaton passed into the Lord’s loving embrace on August 17, 2020 at NCMC. Linda was born prematurely on August 13, 1946 at Boulder Community Hospital to Madeline Jean and William J. Iten. She graduated from Boulder High School in 1964 and married James Robert Stelmack (divorced) on August 6th, 1966. Linda attended Sacred Heart Catholic Church in Boulder until she moved to the Western Slope of Colorado in 1974 to open the Highway 92 Mobile Truck Stop in Crawford. Moving across the western slope, Linda worked hard to raise her family, build life-long relationships, and expand her relationship with God deep in the wild heart of the Rockies. After the surprise arrival of her third and final child (Tiffany) in 1982, Linda and the family moved to Eaton in 1989. A large proponent of shaping young lives, Linda would become the co-founder of Kids Korner Daycare with her daughter, Sandy. Throughout her life, she would help to grow, educate, and cultivate love for over 100 children. She was well known for her love of family, church, and Colorado sports. She was a faithful member of St. Mary’s Catholic Church in Greeley. Linda frequently spent time with her family, cheering on her Colorado Rockies and Denver Broncos. She also loved to attend high school sporting events, including the Eaton Reds and Dayspring Eagles, whether her grandchildren were playing or not. Linda was good natured, warning her grandchildren that she would have to, “get the paddle,” if they didn’t behave, indicating a stick on the wall with a heart-shaped pillow stuck on the end. After retiring to Benjamin Square Apartments, she developed several close friends through her involvement with the resident card ladies, Silver Sneakers, and the Senior Breakfast Club. But, above all else, Linda loved being, “Grandma Linda”. Linda was considered an inspiration by so many whose lives she touched, including all her caregivers who rallied to support her and her family. All the medical team at Banner Health worked especially hard to guide Linda and the family (Thank You, Kris!). Special thanks to Dr. Maurice Lyons for his wisdom, compassion, and counsel. He truly was more than a physician; he was a trusted family friend. She touched so many lives and will continue to inspire us all to live in love, laughter, and goodness towards others. Linda is survived by her two brothers, Kenneth Joseph Iten of Eaton, CO and Michael Lee Iten (Cindy) of Longmont, CO; three children, Troy Alan Stelmack (Monica) of Manteca, CA, Sandra Lynn McIntyre (Captain) of Eaton, CO, and Tiffany Marie Wilkinson (Matthew) of Greeley, CO; 10 grandchildren, Jake Hernandez (Emily), David McIntyre (Ashley), Danny Pintor, Ryan McIntyre (Hannah), Gideon Stelmack, Alyssa McIntyre (Yosef), Adam Pintor, Seth Wilkinson, Jacob Wilkinson, Ethan Wilkinson, and one great-grandchild, Annalynn Paige McIntyre. She was preceded in death by her parents, her former husband, James Stelmack, a great grandchild, Riley McIntyre, and her close companion, Harvey Weber. Visitation will be at Moser Funeral Home in Evans on Thursday, August 20th between 4 – 7, with a rosary at 6. Graveside services will be 11 a.m. on Friday, August 21st at the Eaton Cemetery with a reception to follow at Eaton City Park. Memorial Contributions may be made in Linda's name to the March of Dimes or American Heart Association in lieu of flowers.

The family of Linda Katherine Stelmack created this Life Tributes page to make it easy to share your memories.

Linda Katherine Stelmack (Iten) of Eaton passed into the Lord’s...

Send flowers to the Stelmack family.