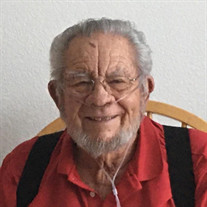 Lloyd Johnson On Tuesday, August 24th 2020 at 4:24 PM, Lloyd left this world from the #4 tee box at Eaton Country Club. Lloyd quietly passed while participating in his favorite activity. He was born to Lloyd Beryl and Mary Alice Johnson nee Frazer on March 16, 1938 in Fort Morgan, CO joining his sister, Mary Alice, in the Johnson family. He grew up and was educated in Fort Morgan and attended college at Montana State College in Bozeman Montana for 2 years. He married Mildred “Millie” Jefferson on July 3rd 1960 in Akron CO. The couple lived in Fort Morgan, CO following their marriage where both their sons were born. Jerry in 1961 and James “Jim” in 1963. The family moved to Craig, CO in 1965 when he accepted a promotion with the Colorado Department of Highways (CDOH) where they resided until 1997. In 1997 he accepted a promotion to Greeley, CO with CDOH and the family moved to Windsor, CO and remained there until 2005 when Lloyd and Millie retired to Eaton to be next to Lloyd’s beloved golf course. Lloyd spent his entire professional career working for the Colorado Department of Highway (CDOH) as an Engineer Tech where he was largely responsible for Project Management of state road construction. He spent the last portion of his career as the Region 4 Utility Engineer before retiring in 1993 at the young age of 55 allowing him to spend more time on activities he loved most: • His family; of which he was constantly proud and doted on relentlessly • His golf game; of which he demonstrated his love for the pursuit more than his love of perfection • His friends; both those he knew well and those he made every day, through his unconditionally optimism and gentle warmth • His love of traveling, primarily in their GMC motorhome, where he was able to meet new people and enjoy their company • His participation in Barbershop society (SPEBSQSA) and the fellowship it created, of which he spent 20 years embracing his love for singing in his deep bass voice and attending the International contests. The family is having a private memorial service. A memorial is being created in his name to support tree replacement at his beloved golf course. Donations can be submitted to Moser in Lloyd’s name. Moser Funeral & Cremation Service 3501 S. 11th Avenue Evans, CO 80620 (970) 330-6824 You are also invited to visit Lloyd’s memorial Facebook page https://www.facebook.com/lloyd.johnson.12382923 to share stories, memories and photos. He was most proud of his 60 years of marriage to the love of his life and best friend, Millie. His two sons and their spouses, Jerry and Debbie and Jim and Robin. Four grandchildren: Josh and wife Shannon, Eric and wife Molly, Connor and Hayley. And 3 great grandchildren: Charlotte “Charlie”, Judah, and Lanning, He is preceded in death by his parents, Lloyd and Alice Johnson and his sister Mary Preston.

The family of Lloyd David Johnson created this Life Tributes page to make it easy to share your memories.

Send flowers to the Johnson family.