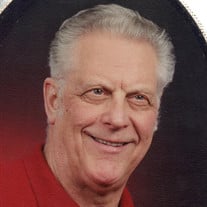 Lloyd Everett Kriegel, 85, of Greeley, passed away on Thursday, January 3, 2019 at Fairacres Manor. He was born September 5, 1933 to Alvin & Eleonora (Schwede) Kriegel in Farwell, Texas. After graduation from high school, he attended Texas Tech. In June of 1957, he married Melba Coldeway in Lubbock, Texas and they moved to Greeley in 1963. He was employed by El Paso Natural Gas, and worked as an insurance agent, before ending his career as a building manager for the Weld County School District 6. He was with the district for 20 years. Survivors include his son, Brian Kriegel (Danelle Ikenouye) of Greeley, a daughter, Sharon (Bryan) White of Pierce, a brother, Nolan Kriegel of LaJunta, 3 grandchildren, and 4 great grandchildren. He was preceded by his wife, Melba Kriegel, his parents Alvin & Eleonora Kriegel, and 2 brothers, Arlyn & Kenneth Kriegel. Visitation will be held from 4-7:00 p.m. on Monday, January 14, 2018 at the Moser Funeral Service Chapel, 3501 S. 11th Avenue in Evans, Colorado. In lieu of flowers, donations may be made to the Gideons in care of Moser Funeral Service. An online guestbook and obituary available at www.moserfuneralservice.com.

The family of Lloyd Everett Kriegel created this Life Tributes page to make it easy to share your memories.

Lloyd Everett Kriegel, 85, of Greeley, passed away on Thursday,...

Send flowers to the Kriegel family.