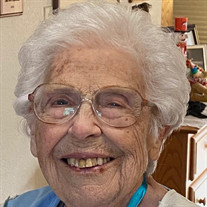 Lolita Jane (Chita) Lebsack passed away peacefully on December 30th, 2020 at her home in Greeley. Our beloved mother, grandmother and friend, was a woman who lived life to the fullest. Born on December 2, 1929 in Denver, Colorado to Ceora and John Ludwig. Chita spent her early years: playing with cousins (Jim and Eugene Ball), ice skating, collecting dolls (a lifelong hobby) and developing a love for reading and history. After high school, Chita completed her undergraduate English degree at what was then Colorado Teacher’s College in Greeley (now the University of Northern Colorado). Before entering the workforce, Chita met and married Donald Lebsack in 1951. They settled in Greeley and raised three children. When her youngest child began first grade Chita added a teaching degree to her accomplishments and began teaching middle school English and Social Studies at Brentwood Middle School for the next twenty-six years. Each year she incorporated new learning and artifacts in her teaching she collected from her summer travels. Chita never stopped learning and earned a Master’s Degree in 1964. Throughout her career Chita was very proud of the part she played in her students’ lives, often buying needed supplies for students. She followed many as they married, became parents and launched into their own professions. When she encountered a former student, she would ask about their children and their significant other by name. Her faith was very important to her. She was an active member and founder of St. Gabriel’s Anglican Church in Greeley and served on the church council and as the treasurer. She delivered and arranged fresh flowers, sometimes from her own garden, each week for the Sunday service. As a church elder, she organized and supervised the church socials. Chita took her church duties seriously, and if you visited her on a Sunday, you would find yourself in the pews beside her: no matter what your excuse. After her retirement from teaching, her life increased in pace rather than slowed down. She became a community volunteer. If you attended an event at the Union County Community Center in the past four decades, chances are Chita helped you find your seat or took your ticket or helped you by performing one of her many other jobs as a volunteer. During the day Chita helped women who had left abusive relationships prepare to enter the workplace by assembling and fitting outfits for interviews. She drove seniors to medical appointments and took grocery orders over the phone for the elderly RSVP. Chita’s volunteer days started early and ended late. She was busy every day of the year. A centerpiece of Chita’s kitchen was a calendar hanging on the cupboard. She proudly shared what she was doing that week with family and friends. Each square of the month was a challenge to decipher because so many activities were listed. In 2015 President Obama recognized Chita with a Lifetime Achievement Award for national and community service. To be recognized for this award Chita documented 4000+ hours of community service over a lifetime. In 2018, her forty years of volunteering culminated in Chita being awarded the “Volunteer of the Year Award” for Weld County. She continued to volunteer until the pandemic. Chita loved to read and travel. Her bookshelves are a tribute to her curiosity about places and people. She loved Europe and South America. Her most recent international trips were to Turkey and Croatia. In her lifetime she visited 41 countries and 48 states. The past few years, her trips took her closer to home and the east coast of the United States. Over the years she had many different traveling companions but her favorite trips were ones she took with her daughter Elaine. When not volunteering or traveling Chita loved to sing and performed at retirement homes as part of the “Keen Age Singers.” Chita collected dolls with a particular interest in dolls made of wax, china, bisque or Paper Mache. She was an active member of the Doll Collecting Community. Now rejoined with her parents and husband, Chita is survived by children: Donita Lebsack May (Tim, deceased) of Greeley, John Lebsack (Ann Claunch) of Albuquerque and Elaine Lebsack Meyer (Dave) of Evans, four grandchildren: Sean Meyer, Morgan May, Collin May and Wynnell Lebsack Black: six great grandchildren: Kaitlyn May, Keegan May, John Patrick Black, Stella Arya Black, Bethany Ruth Black and Justice May. Chita is survived by special friends: Kathy Humphreys, Bev Greene, Liz Armstrong, and Rose Takamoto and her volunteer family. Sonja Burron, her European traveling companion, preceded her in death. As family and friends say goodbye, they are comforted knowing with Chita’s passing that Heaven has a new and tireless volunteer among the angels. No memorial is planned at this time. A “Celebration of Life” will be held when the pandemic is controlled. In lieu of flowers, please remember Chita through a donation to the Wildlife Sanctuary in Keensburg, The Humane Society of Weld County or an organization of your choice that makes your community better..

Lolita Jane (Chita) Lebsack passed away peacefully on December 30th, 2020 at her home in Greeley. Our beloved mother, grandmother and friend, was a woman who lived life to the fullest. Born on December 2, 1929 in Denver, Colorado to Ceora... View Obituary & Service Information

The family of Lolita "Chita" Jane Lebsack created this Life Tributes page to make it easy to share your memories.

Send flowers to the Lebsack family.