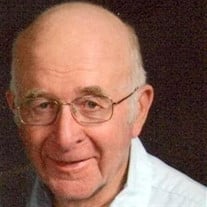 Louis Herman Satter, better known as Louie, born on September 18, 1930 in Mitchell, South Dakota to L. Herman Satter and Marjorie Herrick. He attended rural schools in South Dakota and graduated from high school in Platte, South Dakota in 1948. His father died when he was 19 and he took care of his mother until she died. He worked for a local rancher and in 1956 he was asked to move to Colorado to work for Don Norgran. In March of 1974 he married Nina Tillinghast Race and took on the raising of 3 half grown children. He enjoyed going to their games and track meets. He also enjoyed square dancing as a member of the Merry Mixers. He was a member of Cornerstone Community Church. In his later years he worked for Lextron Animal Health in the warehouse. He is preceded in death by his parents, and granddaughter Katarina Race. He is survived by his wife, Nina, stepsons, Mitchell Race and Monte Race, stepdaughter Denise Race, 9 grandchildren, Casandra (Mitchell) Bauer, Sofia Race, Albert Race, Zoe Race, Angela Race, Arthur Race, Edward Race, Robert Race and Samuel Race. A memorial service will be held 1:00 pm, Tuesday March 26, 2019, at Cornerstone Community Church, 1321 9th Ave in Greeley, Colorado. An online guestbook and obituary are available at www.moserfuneralservice.com

The family of Louis H. Satter Jr. created this Life Tributes page to make it easy to share your memories.

Send flowers to the Satter family.