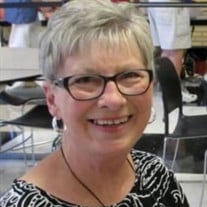 Lynda Sue (Eaton) Reynolds, 74, of Eaton, Colorado, entered the gates of heaven to be reconnected with her beloved son, David and daughter, Angela, on October 22, 2021. She was born on August 16th, 1947, at Larimer County Hospital in Fort Collins to Charlotte (Taylor) Eaton and James Eaton. Growing up in Eaton, Lynda developed many lifelong friendships that brought her much joy. She attended Eaton High School for 3 years and graduated from Greeley High School in 1965. She was passionate about marching band throughout high school and was gifted at playing the piano and the flute. She later played the piano and organ for the Greeley FourSquare Church. Lynda was an independent force of nature. In an act of rebellion against moving to Greeley for her senior year of high school, Lynda changed the birth spelling of her name from Linda to Lynda. She married Allen Reynolds on January 10, 1970. Following the still-birth of their daughter, Angela, they adopted twins, James and Nathan from Vietnam during the fall of Saigon. They had 2 other sons together, David and Jonathan. In 1998 they hosted a foreign exchange student from Hungary, Gergo Garai. She often referred to Gergo as her 5th son and she loved him as her own. In 1999, she traveled to Budapest with husband Allen and son Jonathan to visit Gergo. It was an unforgettable experience. Lynda was passionate about teaching and received a bachelor's degree in early childhood education from the University of Northern Colorado. She soon put her teaching dreams aside to become a full-time caretaker for her son David, who suffered from Duchenne Muscular Dystrophy. For the last 20 years, Lynda has worked as a court transcriber, something she did dutifully until very recently. Lynda was meticulous in her work and took a great deal of satisfaction in her ability to complete lengthy cases under difficult deadlines. Lynda’s favorite time of year was Christmas and she always worked hard to make special memories for her family through her amazing culinary and baking skills as well as her stockpile of Christmas decorations. Hallmark channel was invented for people like Lynda who loved celebrating the season, even in July. Lynda had a lifelong interest in genealogy and spent many hours tracing her family lineage all the way back to Sweden. Lynda was very patriotic and proud of her family roots. She dedicated much of her time to the Daughters of the American Revolution, an organization she was honored to be a member of. Lynda loved to go on trips. When her boys were young, she and Allen took them on many road-trips all over the U.S. Later on, she and Allen went on many cruises together with some of their closest friends. Their most recent adventure was a trip to Sweden in 2018, where they were both able to meet some of their cousins for the first time. She talked about this trip often and said it was the most wonderful travelling experience of her life. She longed to go back someday. Above everything else, Lynda loved her family deeply and unconditionally. She had their back through thick and thin and could always be counted on during difficult times. She spent many long hours with her boys sitting around the kitchen table, talking late into the night. Most recently she loved spending time with her grandchildren. Her grandsons created an iconic hangout spot in her garage where she always kept the fridge stocked with soda and the cabinet stocked with chips and snacks. She was proud to be known as “Nana”, not only by her grandchildren but also by all of their friends who would come to hang out. She was preceded in death by her beloved grandmother Nellie Taylor (Manion), her parents James Eaton and Charlotte Eaton (Taylor), her son David who she loved immensely, her daughter Angela, nephews Chance Taylor Hood and Andrew Chapman Hood. Lynda is survived by her husband, Allen; her sister Shelley Hood (Larry); her sons, Nathan Reynolds, James Reynolds and Jonathan Reynolds (Elizabeth); Grandchildren, Charlotte Reynolds, David Reynolds, Elijah Reynolds and Cecilia Reynolds. A celebration of Lynda’s life will be held at Eaton Community Church on Friday, November 12th from 1:30—4:30 p.m. Come and go as you please. A private graveside service will be held at Eaton Cemetery. In Lieu of Flowers, the family requests that you sponsor a wreath in memory of Lynda for Wreaths Across America Centennial State Chapter, a cause that was very near and dear to her heart. Memorial contributions for Wreaths Across America may be made in Lynda's name by following the link provided: https://donate.wreathsacrossamerica.org/?pageId=159532&relatedId=44533&productId=114

Lynda Sue (Eaton) Reynolds, 74, of Eaton, Colorado, entered the gates of heaven to be reconnected with her beloved son, David and daughter, Angela, on October 22, 2021. She was born on August 16th, 1947, at Larimer County Hospital in Fort Collins... View Obituary & Service Information

The family of Lynda S. Reynolds created this Life Tributes page to make it easy to share your memories.

Send flowers to the Reynolds family.