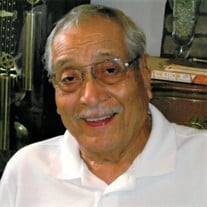 Manuel Jimenez, 85, of Eaton Colorado, entered the gates of heaven on Sept 21, 2019, as the result of a cerebral hemorrhage. He was born in Sedgwick, CO to Florencia Guerrero. After the passing of his mother, he and his siblings were raised by his grandparents Celso and Nieves Guerrero in Greeley. He overcame the barriers of the English Language from his Hispanic up bringing to accomplish much educationally, graduating from Greeley High in 1953. He attended CSCE (UNC) for one year with help from an Our Lady of Peace scholarship. In 1954 Manuel enrolled in the USAF serving 4 years, 3 in England during the Korean conflict as a military policeman. He married Juanita Martin in San Antonio, TX in 1958. To this union were born two daughters: Michele Mari and Christine Denise. After graduating from CSCE with a BA & MA he began his teaching career in Eaton in 1961. He taught art, English and Spanish before he was appointed Assistant Principal in 1974. Manuel served as High School Principal from 1981 to 1993. During his retirement he substituted in several Weld County school districts. Also, he was the middle school/ high school principal and co-superintendent for the Mescalero Apache Schools in New Mexico. In 1998 Manuel returned to Eaton and began instructing and testing students in English as a Second Language at the Platte Valley School District in Kersey. He finished his career there as High School Principal in 2002 Additionally he served his community as a reserve police officer from 1985 to 1995. A few of Manuel’s lifetime honors include: Selected as one of 30 participants for a National Defense Education Act Spanish Institute at the WI University in Madison; one of 17 Fine Arts Educators as a Fulbright-Hayes Scholarship winner to study art history in Italy, summer, 1972; he was a member of Delta Phi Delta National Art Society; he was selected as “Administrator of the Year” in 1993 by the Eaton School Faculty. In 1996 he married Mary (Brown) Gibbs and they enjoyed traveling, family times and celebrations. He loved art, practical jokes, goofy presents and dearly loved his family. He is survived by his wife, two daughters, stepson Jim Gibbs, grandchildren, Clair Novi, Sam Krause, Carly Watson, Wendy Watson and great-grandchildren Amerie and Ariel Valenciano and Emmett Schermann; sister Jenny(Tony) Herrera and brother, Sabino (Charlotte) Jimenez and numerous nieces, nephews, and cousins. He was preceded in death by his sister Julie Perez, grandson Niklaus Jimenez Krause, and stepson Fred Grant Gibbs. During his life Manuel was a member of Faith Lutheran Church in Eaton and embraced the word of Jesus in Matthew 25:40 “In as much as you have done it to the least of one of these my brethren you did it to me.” His final gift was as a tissue donor. The Best is yet to Come! A viewing will be held from 1:00 until 4:00 p.m. on Sunday, September 29, 2019 at the Moser Funeral Service Chapel, 3501 S. 11th Avenue in Evans. A memorial service to celebrate Manuel’s life will be held at 11:00 a.m. on Monday, September 30, 2019 at the Eaton Evangelical Free Church, 1325 3rd Street in Eaton. Memorial gifts may be made to the Manuel Jimenez Memorial Fund to be used for the Eaton High School Scholarship Fund or the Faith Lutheran Church.

Manuel Jimenez, 85, of Eaton Colorado, entered the gates of heaven on Sept 21, 2019, as the result of a cerebral hemorrhage. He was born in Sedgwick, CO to Florencia Guerrero. After the passing of his mother, he and his siblings were raised... View Obituary & Service Information

The family of Manuel Jimenez created this Life Tributes page to make it easy to share your memories.

Manuel Jimenez, 85, of Eaton Colorado, entered the gates of heaven...

Send flowers to the Jimenez family.