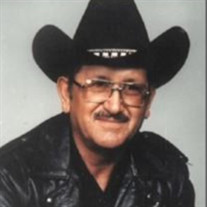 Manuel Casey Martinez exited his final rodeo on July 6, 2020 to enter a new Frontier with his Lord and Savior. Manuel was born February 15, 1928 to Eduardo Martinez and Elizabeth Gallegos. He began his journey at an elementary age raising cattle, sheep, and goats for the family business. He left home in his early teenage years to seek work in logging, where he met his wife (Susie Ruby Lucero) and raised their 13 children while working for the family logging business before moving to Greeley in early 1957. He then worked for Dinner Bros., raising cattle until 1968, where he was a horse trainer and rancher on the Labriar Ranch in Tierra Amarilla, New Mexico. He then moved to Monte Vista and worked in farm work and stock until early 1974 when he returned to Greeley, Colorado for good. He worked in the cattle/sheep industry and farming until his retirement in the early 2000’s. He enjoyed fishing, hunting, and telling stories to family, enjoying their company was his past time of choice. He enjoyed going to casinos in New Mexico and playing bingo locally. His family was his biggest joy. He excelled at dancing, breaking horses and fishing. He was very self-sufficient until his later days when his children cared for him in their homes. Manuel’s surviving relatives include his sons: Manuel Orlando Martinez (Paula), Jim J Martinez (Benita), Leroy Martinez, Arnold Martinez (Teresa), Casey Martinez (Caroline), and Delfino Maldonado. His daughters: Prescilla Martinez, Martha Maldonado, Joyce Sandoval, Sally Martinez (Juan Perez), Barbara Martinez, and Frances Martinez (Robert Lopez). His brother and sisters: Tony Gallegos (Kay), Marie Martinez, Eleanor Maestas and Marvene Pedraza (Lupe). Manuel had 26 grandchildren, over 45 great-grandchildren, and 8 great-great-grandchildren. He is preceded in death by his son Leonard, daughter Evelyn, brothers Cipriano Gallegos and Philadelfio Gallegos (Frances). Visitation will be 4:00 – 7:00 p.m., Monday July 13, 2020 at the Moser Funeral Service Chapel, 3501 S. 11th Avenue in Evans. with the Recitation of the Rosary starting at 6:00 p.m. A Funeral Mass will be at 9:30 a.m., Wednesday, July 15, 2020 at St. Peter Catholic Church, 915 12th Street in Greeley.

Manuel Casey Martinez exited his final rodeo on July 6, 2020 to enter a new Frontier with his Lord and Savior. Manuel was born February 15, 1928 to Eduardo Martinez and Elizabeth Gallegos. He began his journey at an elementary age raising... View Obituary & Service Information

The family of Manuel Casey Martinez created this Life Tributes page to make it easy to share your memories.

Send flowers to the Martinez family.