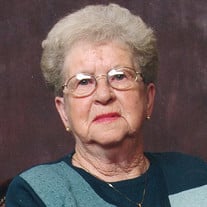 Margaret “Marge” Dickinson, 90 of Greely passed away on Monday, May 7, 2018 at TRU-Hospice of Northern Colorado inpatient unit. She was born September 14, 1927 in New Helena, NE to John and Goldie (McDermott) Williams. She grew up in Anselmo, NE and graduated from Anselmo High School as valedictorian. On October 28, 1946 she married G. F. “Dick” Dickinson in Marysville, Kansas. They celebrated 55 years of marriage before his death in 2002. Together with her husband and daughters, Margaret was baptized at the First Christian Church in Greeley on April 5, 1959. She worked many years in retail and as an independent contractor process server. She was a homemaker and the joy of her life was her family and many friends. “Grandma Maggie” as she was known by all her grandchildren, found satisfaction and enjoyment in cooking and baking for her family, friends and especially her grandchildren. She is survived by twin daughters, Deanna(Richard) Hawley of Greeley, Donna (Loyd) Ivie of Eaton. Grandchildren, Chad Hawley, Wende (Hawley) Younger, Jill (Campbell) Hatfield, Joel Campbell, Justin Ivie, Jason Ivie, and 8 great grandchildren. Sister, Jean Sheets of Kersey, and numerous nieces and nephews. She was preceded in death by her husband, parents and 8 brothers, John, Wilbur, Jack, Bob, Oscar, Ray George and Ronnie. Memorial Services will be Sunday, May 20, 2018 at 1:30 pm at Borgmann Chapel, Bonell Good Samaritan Society, 708 22nd St. Greeley, CO. Private inurnment will be in Fort McPherson National Cemetery, Brady, NE. In lieu of flowers, memorial gifts may be made to TRU Hospice of Northern Colorado in care of Moser Funeral & Cremation Service, 3501 S. 11th Avenue, Evans CO 80620. An online guestbook and obituary are available at www.moserfuneralservice.com.

Margaret &#8220;Marge&#8221; Dickinson, 90 of Greely passed away on Monday, May 7, 2018 at TRU-Hospice of Northern Colorado inpatient unit. She was born September 14, 1927 in New Helena, NE to John and Goldie (McDermott) Williams. She grew... View Obituary & Service Information

The family of Margaret "Marge" Dickinson created this Life Tributes page to make it easy to share your memories.

Margaret “Marge” Dickinson, 90 of Greely passed away on Monday,...

Send flowers to the Dickinson family.