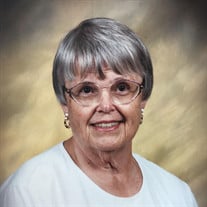 Marion Pomeroy Gilbert passed away on October 11th, 2018 at her home in Greeley, Colorado. Born Marion Eleanor Pomeroy on September 7, 1930 in Gaylordsville, CT, she was the daughter of Mary Paine Pomeroy and Charles Chase Pomeroy. Marion attended school in the last ‘One Room School House’ in Connecticut and graduated from New Milford, CT High School in 1948. She attended Green Mountain Junior College in Poultney, Vermont after which she worked for Guideposts in Pawling, NY. She completed her college education, earning a B.S. in Home Economics with a Minor in Early Childhood Education at the University of Connecticut. Following graduation, she took a job at the Stamford, CT Day Nursery. Then in 1956, she relocated to Pittsfield, MA to become Director of the Family and Children’s Service there. In 1959, she married Franklin B. Gilbert Jr.—a Fall River, MA native--, and together they raised 2 children, David and Jane. During those years, the family was active in the First United Methodist Church in Pittsfield, where both Marion and Franklin were longstanding choir and bell choir members. Marion continued to serve in the education of children and was instrumental in the development of the Pittsfield Early Childhood Development Center, volunteering as a Director of the Center. She also volunteered in the Pittsfield Public schools as a librarian. With their children grown, Marion and a good friend started the “Red Door Nursery School” in Pittsfield, which they ran successfully for 10 years until they retired. Having built a strong reputation and owing to Marion’s and her business partner’s childhood education skills, they sold the business, which continued to serve the needs of the community. In addition to her interest in Early Childhood Education, Marion’s passion was Choral Singing. This interest started in Junior College and continued through her retirement years. She was asked to participate in several church choirs and community singing groups throughout the years. As part of a choral group in Pittsfield, she participated in the singing of Randell Thompson’s “Alleluia” at the wake of Boston Symphony Orchestra conductor, Serge Koussevitzky’s widow, Olga, at the Church on the Hill in Lenox, MA one cold February day in 1978. As part of another local choral group, Marion had the honor of performing a debut of a Mass written by New York composer, Leonard Kastle at the Center for the Performing Arts in Albany, NY. Throughout their marriage Marion and Franklin shared a passion for travel, visiting many countries on four continents. They also shared a love of the beach, spending many summers with family and friends at Cape Hatteras. Upon their retirement, they moved from Pittsfield and became “snowbirds” spending Summers on the Sakonnet River in Portsmouth, RI and Winters in Bradenton, FL for many years before moving to Colorado to be close to their daughter and son-in-law. Marion is survived by her husband, Franklin, her son David (Joyce) of Wollaston, MA and her daughter, Jane Chadwick (Christopher) of Johnstown, CO. She will be interred at Morningside Cemetery in Gaylordsville, CT at a time to accommodate the family. Given Marion’s long history of involvement in her community, the family respectfully requests donations be made to a local charity of your choice in her honor.

Marion Pomeroy Gilbert passed away on October 11th, 2018 at her home in Greeley, Colorado. Born Marion Eleanor Pomeroy on September 7, 1930 in Gaylordsville, CT, she was the daughter of Mary Paine Pomeroy and Charles Chase Pomeroy. Marion... View Obituary & Service Information

The family of Marion P. Gilbert created this Life Tributes page to make it easy to share your memories.

Send flowers to the Gilbert family.