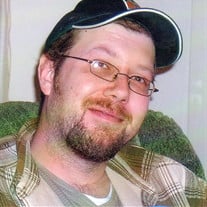 Mark Lynn Schulz, 41, of Eaton, Colorado died Tuesday, April 10, 2018 after a year-long battle with cancer. Mark was born on June 17, 1976 to Roger and Aleta (Syes) Schulz of Eaton, Colorado. Mark was proud to be an Eagle Scout, which he achieved in 1991 and he was fortunate to attend the National Scout Jamboree in 1989. After graduating Eaton High School in 1994, he attended Aims Community College to earn an Associate of Arts degree. Mark spent several years as a professional cook at the Eaton Country Club and Boomerang Golf Course before most recently working as a flow technician for Colorado Engineering Experimental Station, Inc. Everyone from his work enjoyed him and wanted to be around him. Mark enjoyed spending time in the mountains, riding ATVs, science fiction, collecting vintage games and comic books, caring for his cat, and annual trips to Black Hawk with his friends and brothers. Mark was baptized at Eaton First Baptist Church, where he attended church throughout his youth. More recently, he faithfully attended Eaton Community Church for the past 9 years. Mark loved, and was loved by, his three brothers. He was cherished and adored by his entire family and will be greatly missed. Mark is survived by his parents; three brothers, Stacy (Kathy) Wright of Camp, Ark., Lee (Lori) Wright of Berthoud, Matt (Lisa) Schulz of Morrison; two uncles, John L. Schulz of Fort Collins, and John Syes of Ault; several cousins, nieces and nephews and his beloved kitty Juno. He was preceded in death by his grandparents, John and Ottillie Schulz, and Earnest and Betty Syes; one uncle, Bert Syes; three aunts, Mary Beth Salomonson, Valerie Goodvin and Jackie Schulz; and niece Laci Wright of Camp, Arkansas. Services will be held on Wednesday, April 18, 2018 at 10:30 a.m. at the Eaton Community Church (formally the First Congregational Church of Eaton) at 325 2nd Street in Eaton. A private interment for family will precede at the Eaton Cemetery. In lieu of flowers, memorial contributions may be made to the Humane Society of Weld County or the Eaton Community Church in care of Moser Funeral Service, 3501 S. 11th Avenue, Evans, Colorado 80620.

Mark Lynn Schulz, 41, of Eaton, Colorado died Tuesday, April 10, 2018 after a year-long battle with cancer. Mark was born on June 17, 1976 to Roger and Aleta (Syes) Schulz of Eaton, Colorado. Mark was proud to be an Eagle Scout, which he... View Obituary & Service Information

The family of Mark Schulz created this Life Tributes page to make it easy to share your memories.

Send flowers to the Schulz family.