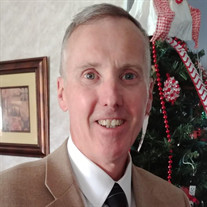 Mark Joseph Ward (64) went to be with the Lord while being surrounded by his loving family at home on May 12, 2021 after a 2 ½ year battle with Multiple Myeloma. Mark retired as the Weld County Coroner on December 31, 2017. While in the coroner’s office Mark completed the Weld County Law Enforcement Training Academy achieving the award for Academic Excellence. Mark also achieved Fellowship Status with ABMDI (American Board of Medicolegal Death Investigators) being only the 2nd person in Colorado to achieve this level. Mark was an Air Force veteran who served 20 years for his country. He spent 5 years in the Military Police and 5 years in the SAC (Strategic Air Command) Elite Guard finishing his career in the Safety division. Mark was an active member of Greeley First Assembly of God and a faithful follower of Jesus. Mark’s passion was to reach the people of Greeley by going door-to-door praying for their needs. Mark enjoyed hiking the moutains of Colorado completing two 14’ers (Mount Bierstadt and Grays Peak) before being diagnosed with Multiple Myeloma. He also had a passion for target shooting becoming a skilled marksman. He loved honing his skill with various firearms. His other hobbies included chess and golf. Mark is survived by his wife Sherri, daughters Cori Waldburger, Danielle (Tim) Kerns, Priscilla (Aaron) Beard and Ashley (Alex) Jackson. Sons Gary Ward and David Ward. Brother Scott (Anna) Ward. Sister-in-laws Janet (Robert) Allan and Bonnie (Ron) Mozer. Brother-in-law Randy (Judy) Dolton. Grandchildren Kaleb, Rebecca, Garrett, Ana, Genevieve, Aydian, Amelia and Ian. He also had many beloved nephews and nieces. Mark was preceded in death by his father Melville G. Ward, mother Claire S. Ward, brother Peter Ward, father-in-law Lester M. Dolton Jr., mother-in-law Janet A. Dolton and brother-in-law Brian K. Dolton. Mark was so loved and will be sorely missed by many! Visitation will be on Tuesday, May 18, 2021 from 12:00 pm to 2:00 pm and 4:00 pm to 7:00 pm. Funeral services will be held on Wednesday, May 19, 2021 at the First Assembly of God Church on 3000 16th St, Greeley, CO 80634 at 10:00 am. A Graveside service will follow at the Linn Grove Cemetery on 1700 Cedar Ave, Greeley, CO 80631 at 11:30 am. In lieu of flowers donations can be made to the Leukemia & Lymphoma Society.

Mark Joseph Ward (64) went to be with the Lord while being surrounded by his loving family at home on May 12, 2021 after a 2 ½ year battle with Multiple Myeloma. Mark retired as the Weld County Coroner on December 31, 2017. While in the coroner&#8217;s... View Obituary & Service Information

The family of Mark J. Ward created this Life Tributes page to make it easy to share your memories.

Mark Joseph Ward (64) went to be with the Lord while being surrounded...

Send flowers to the Ward family.