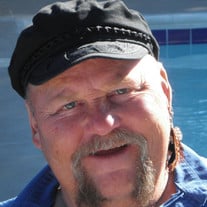 Michael "Mickey" E. Arwood Sr., lost his battle with cancer and went on to be with Jesus at the age of 63 on April 23, 2018. He was born on March 14, 1955 in Johnson City, Tennessee to Robert W. and Norma (Leonard) Arwood. His father preceded him in death. Mickey is survived by his mother, Norma Wilkes and husband, Norm Wilkes of California; his three children, Josephine Arwood of Colorado, Norma Arwood of California, and Michael Arwood, Jr. of Nebraska; a granddaughter, Rosie Arwood of Texas; his soulmate, Debbie Jo Grossnickle of Colorado; and three sisters, Karen and husband, Audy Barnett of Virginia, Sandy and husband Dan Bray of California, and Donna and Mike Carmody of Virginia; 10 nieces and nephews; 23 great-nieces and nephews; several aunts and uncles and step mother Pauline Arwood of California. In addition to his father, Robert W. Arwood Jr., he is preceded in death by his grandparents, Robert and Esther Arwood Sr. of California, and Searle and Martha Leonard of Tennessee. Mickey graduated from Mount Miguel High School in Spring Valley, California. He lived in Evans, Colorado since 2006. Over his lifetime, Mickey worked at: Triple L Enterprises and the City of San Diego, California; the City of Hampton, Virginia; and companies NIM, BMC, and A&W Water, all of Colorado. Mickey loved being outdoors, going fishing, collecting guns, riding horses and motorcycles and walking in the mountains. One of his favorite pastimes during retirement was sitting on the bench at a local Wal-Mart in Greeley. Mickey knew no strangers and he loved to talk to anyone and everyone who would stop to listen. At first if you didn’t know him, he could seem a bit intimidating, but he really was just a big old teddy bear who gave great hugs. Truly, Mickey was one of a kind as a son, brother, father, friend, and protector, always with a gentle spirit. Mickey thought that no child should ever have to endure the pain or sickness of cancer, so in his honor we are asking that any memorial gifts be donated to the Children’s Hospital of Denver and/or Saint Jude’s Children’s Hospital. There will be a private celebration to honor his life and memories with close friends and family. Mickey, you were loved by all and will be missed by so many. “Happy trails to you, until we meet again.”

Michael "Mickey" E. Arwood Sr., lost his battle with cancer and went on to be with Jesus at the age of 63 on April 23, 2018. He was born on March 14, 1955 in Johnson City, Tennessee to Robert W. and Norma (Leonard) Arwood. His father preceded... View Obituary & Service Information

The family of Michael Eugene Arwood created this Life Tributes page to make it easy to share your memories.

Send flowers to the Arwood family.