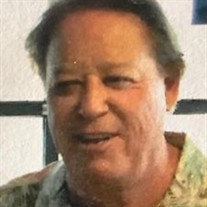 Michael Alan Steinbach, 65, of Wiggins passed away December 10, 2020, at North Colorado Medical Center. He was born July 21, 1955, in Brighton to John and Lillian Steinbach. Michael grew up in a family of four brothers and graduated from Brighton High School in 1973. He and Kerrie married on New Year’s Eve in 1989. Michael formed his own company, Mountain Specialty, in 1988 and served as a manufacturers’ representative in the oil and gas industry until his death. Michael is survived by his wife Kerrie; son Alexander (Jordan) of Fairbanks (AK); daughter Stacy (J.B.) Dimick and seven-year old grandson Grant of Eagle Point (OR); and his brother Jerry (TX). Michael was predeceased by his parents, older brother Leonard, and younger brother Scott. Michael and his brothers grew up in rural Brighton, learning to care for animals. He was in 4-H Club and once, as a youngster, bought 25 chickens at an auction not knowing that the flock was all roosters. They had a favorite horse, Rony, that would occasionally walk into their house, surprising their mother. Mike played football and was active in Brighton High School sports, inspired by Leonard. Michael taught his daughter Stacy to drive, ride horses, and be Alex’s big sister. He and Stacy cheered on the Denver Broncos together. Michael enjoyed helping Alex in 4-H and Future Farmers of America (FFA) at Wiggins High School and coaching Little League Baseball. He also raised Hereford cattle. While serving on the Wiggins Board of Education, 2009-12, Michael represented the school board on the Centennial Board of Cooperative Services (BOCES). Michael and Kerrie traveled in Europe where Michael fell in love with London Cabs, even purchasing one to drive in Colorado. They spent many happy days with family and friends at their Glen Haven cabin. Michael had an infectious smile and was always the life of any party. Michael’s family suggests memorial contributions to Wiggins FFA, 201 Tiger Way, Wiggins, Colorado 80654. A Celebration of Life will be held at a later time. An online guest book is at moserfuneralservice.com. Prost, Michael!

Michael Alan Steinbach, 65, of Wiggins passed away December 10, 2020, at North Colorado Medical Center. He was born July 21, 1955, in Brighton to John and Lillian Steinbach. Michael grew up in a family of four brothers and graduated from Brighton... View Obituary & Service Information

The family of Michael Alan Steinbach created this Life Tributes page to make it easy to share your memories.

Send flowers to the Steinbach family.