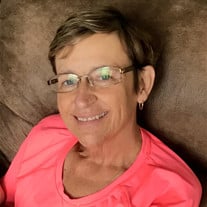 Nancy Ruth Hammond, 60, of Greeley passed away on Saturday, December 16, 2017 at Pathways Hospice in Loveland, Colorado. She was born to Jon & Berta (Amen) Hergenreter on December 7, 1957 in Sterling, Colorado. She was a graduate of Sterling High School in 1976 where she met Randy, her first and only love. On August 6, 1977 she married her best friend, Randy. She was creative and loved to challenge herself with new crafts which often were gifted to those she loved. Nancy had an adventurous spirit and she fed it by traveling and exploring places such as Costa Rica, Hawaii, England, Mexico and multiple states. But, her favorite destination was anywhere that included her grandbabies whether it was to visit them in Oregon or taking them on a cruise. Her love for Randy and her children was only surpassed by her love for her grandbabies. Nancy was a natural and selfless nurturer to all who met her and she welcomed everybody with open arms and a loving heart. She is survived by her husband, Randy, her son, Jacob (Sarah) Hammond, her daughter, Jessica Gonquist, her grandchildren, Wyatt, Hudson, Maisie, and Jett Hammond, and Jace Gronquist, her brothers, Mike (Dixie) Hergenreter and Pat (Susan) Hergenreter, her sisters, Sharon Weingardt, Marianne (Mike) Lynch, and Judy Hergenreter. She was preceded in death by her parents, Jon & Berta Hergenreter, a sister Jeanne (Paul) Berhost, a brother, Jon Hergenreter and a brother-in-law, Tom Weingardt. A celebration of Nancy’s life will be held at 10:30 a.m. on Friday, December 22, 2017 at the Moser Funeral Service Chapel, 3501 S. 11th Avenue, Evans, Colorado 80620. In lieu of flowers, memorial gifts may be made to the Colorado Ovarian Cancer Alliance in care of Moser’s An online guestbook and obituary are available at www.moserfuneralservice.com

Nancy Ruth Hammond, 60, of Greeley passed away on Saturday, December 16, 2017 at Pathways Hospice in Loveland, Colorado. She was born to Jon & Berta (Amen) Hergenreter on December 7, 1957 in Sterling, Colorado. She was a graduate of Sterling... View Obituary & Service Information

The family of Nancy Ruth Hammond created this Life Tributes page to make it easy to share your memories.

Nancy Ruth Hammond, 60, of Greeley passed away on Saturday, December...

Send flowers to the Hammond family.