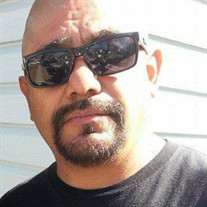 Nicolas Rodriguez, 53 years of age, passed on Friday, April 09, 2021 at his home. He was born November 26, 1967 in Clinton Oklahoma, to Guadalupe & Bernarda Rodriguez. He was the 11th child of their 12 children. Nicolas was educated at Greeley Central High School, in Greeley, Colorado. He married Brenda Rodriguez September 13, 2003; they had been together since October 1991, this year would be 30 years together. From this marriage, they had 2 children, Nicolas Jr. Rodriguez & Jericka. Nick also had another daughter Iesha. Nicolas, in all his working life, was a production worker and forklift driver. He was a loving son, husband, father, brother, uncle, ampa, cousin and friend. He loved his family, and he was the life of the party; his laugh was contagious, and anyone and everyone loved to be around him. Nicolas was a true, loyal Raider fan he would say “Raider fan till the day I die”. He loved watching WWE wrestling, and loved to gamble at the casinos. He was always a prankster, and he loved to prank his nieces and his sister Frances all the time. Some of them believed him and some of them knew he was joking around. By the end of the day his happiness was to come home to his wife, kids, and grandkids. Nicolas is survived by his wife Brenda, his daughter Jericka Rodriguez, his son Nicolas Jr (Rosa) Rodriguez, and his daughter Iesha, Nicolas raised 3 nieces and 1 nephew like his own, Mandy Rodriguez, Becky Rodriguez, Anahli Mireles and Justin Mireles. He is also survived by his parents Bernarda Rodriguez & Guadalupe (Olivia) Rodriguez; his siblings, Olga H. Avelar, Robert Rodriguez, Frances (Willie) Garza, Nora (Robert) Rodriguez, Rosa Rodriguez, Noemi Rodriguez, Benita (Seferino) Cano, and Eddie (Angie) Rodriguez. He has 4 grandkids, Anevay, Catalaya, Nicolas Jr III, and Octavious. He is preceded in death by his 4 grandparents, 3 brothers, Raul Hernandez, Guadalupe Jr Rodriguez, Manuel Rodriguez, 2 nieces, and 1 nephew Rachael, Abby, and Jacob. A visitation will be held on Thursday at 4-7:00 p.m. at the Moser Funeral Service Chapel, 3501 11th Ave, Evans, CO. A celebration of life will be Friday at 10:00 a.m. also at the Moser Funeral Home. Interment will follow at Linn Grove Cemetery in Greeley. Reception will be at the Moose Lodge in Evans, CO from 1-5:00 p.m. following the cemetery service.

Nicolas Rodriguez, 53 years of age, passed on Friday, April 09, 2021 at his home. He was born November 26, 1967 in Clinton Oklahoma, to Guadalupe & Bernarda Rodriguez. He was the 11th child of their 12 children. Nicolas was educated at Greeley... View Obituary & Service Information

The family of Nicolas Rodriguez created this Life Tributes page to make it easy to share your memories.

Send flowers to the Rodriguez family.