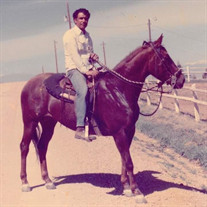 Nicolas Valenzuela Anaya 83 of Berthoud, Co died Thursday November 25, 2021, on Thanksgiving night at UC Health in Greeley. Nicolas was born on December 10, 1937, in Mulato Municipio de Ojinaga, Chihuahua to Isabel Valenzuela Ramos and Guadalupe Anaya Rios. On September 7th, 1973, he married Helen Maestas. He was with her since 1968. They were married for 54 years until his death. Out of this marriage they had a daughter named Brenda Valenzuela. He also had 2 stepsons their names were Danny Maestas and Lupe Lujan. He also had another son from previous marriage and his name was Santos Valenzuela. Nicolas was raised in Palomas Numero 1, where he was educated and went to school. Nicolas was a very hardworking man. He dedicated his life to his work, always on time, never missed work. He loved all his jobs. He worked on the Schaal Farm doing farm work. He also worked production for several years. He then retired from Colorado Precast in Loveland. Nicolas loved his family. He was a very family orientated man. He always wanted his kids, grandkids, his nephew and nieces around him. He always wanted to have family over to do carne asada and chicharrones. Nicolas was a storyteller. Everyone loved his charras and they can sit for hours listening and laughing with him. He loved living on the Schaal farm. He loved the outdoors walking his dogs and riding and training his horses. He also loved going to the gas station buying and playing scratch tickets. He also loved to go to Blackhawk to play at the casinos. His grandkids and great grandkids were his life. He always made sure they had what he needed, buying them fruits and taking them to Hays Market in Berthoud and in Johnstown. Nicolas was survived by his wife Helen, his daughter Brenda Rodriguez, his stepsons, Danny Maestas, Lupe Lujan, and his son, Santos Valenzuela, his grandkids, Nick and Rosa Rodriguez, Jericka Rodriguez, and his great grandkids Avy, Catalaya, Nick lll, and Octavious, Justin and Anahli, his sisters Luciana and Juan Porras, Isabella and Juan Salcido, and several nieces and nephews. He has proceeded by his parents, Isabel and Guadalupe Valenzuela, his sisters, Dominga Jimenez, Agapita Porras, Pillar Olivas and his twin sister Maria Valdez, his brothers, Juan Valenzuela, Doroteo Valenzuela, Matias Valenzuela, his son-in-law, Nicolas Rodriguez, along with several nieces, nephews, sisters-in-law, and brothers-in-law. A visitation will be from 4:00-7:00 p.m. on Thursday, December 9, 2021, with Recitation of the Rosary beginning at 6:00 p.m. all at the Moser Funeral Service Chapel, 3501 S. 11th Avenue in Evans. A Mass of Christian Burial will be 1:00 p.m. on Friday, December 10, 2021, at St. John the Baptist Church, 1000 Country Acres Dr, in Johnstown.

The family of Nicolas Valenzuela Anaya created this Life Tributes page to make it easy to share your memories.