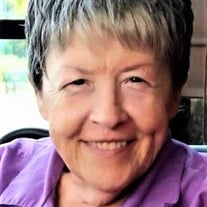 Norma Jean Boda of Greeley, Colorado died peacefully, surrounded by her family on Sunday, August 30th, 2020 at her home in Greeley. She was 77 years old. She was born on January 28, 1943 in Fulda, Minnesota to Fred and Elizabeth (Bott) Wolf. Norma grew up farming with her family in southwestern Minnesota and she proudly called herself a “Minnesota Farm Girl”. She and her family attended St. Paul’s Lutheran Church and School where she was baptized and confirmed. She graduated from Fulda High School in 1961 and went on to attend Worthington Junior College in Worthington, Minnesota, where she studied business. In 1964 she moved to Longmont, Colorado where she worked for Beech Aircraft. In 1965, she met Harlan LeRoy Boda at Messiah Lutheran Church in Longmont. On June 25, 1966, they were married at Messiah and were blessed with 54 years of marriage. She and Harlan lived in Longmont where they raised their children. She worked as a stay-at-home mom and later was employed at EDS, Farmers Insurance, and NeoData. In 2007, they moved to Greeley, Colorado where they have been blessed with wonderful neighbors. She and Harlan enjoyed traveling together and spending time at their cabin. They especially loved visiting their daughter and son-in-law's farm in Peetz, Colorado. They felt very connected and involved in the welcoming community of Peetz. On their weekend visits, they enjoyed attending Trinity Lutheran Church in Sterling, Colorado. Norma was actively involved in the lives of her children and grandchildren. She treasured each of their unique qualities, and enjoyed following their academic, athletic, and extracurricular achievements. The grandkids always enjoyed their time with grandma. Norma was a loving and proud grandmother who made each grandchild feel special with her beautiful smile. She was preceded in death by her loving parents Fred and Elizabeth Wolf. Norma is survived by her husband Harlan Boda; a son, Brad Boda; two daughters, Kim Spooner and her husband Frederick of Greeley, Colorado and Bev Davis and her husband Brent of Peetz, Colorado; four sisters, Marjorie Ruesch and her husband Leonard of Worthington, Minnesota, Mary Menk and her husband Gerald of Grayslake, Illinois, Myrna Hammond and her husband Chuck of Sioux Falls, South Dakota, and Karla Evers and her husband Kevin of Dundee, Minnesota; one brother, Carl Wolf and his wife Jennie Sochon of Chicago, Illinois; ten nieces and six nephews; and six grandchildren, Adam Davis, Sarah Davis, Matthew Davis, Owen Spooner, Max Spooner, and Ian Spooner. A memorial service will be shared through social media at a date to be determined. If you are interested in receiving more information or an email with the link, please send an email to [email protected] The family is grateful for the wonderful services of Banner Hospice and would encourage contributions to be made to Banner Hospice, in care of Moser Funeral Services, 3501 S. 11th Ave., Evans, Colorado 80620, 970-330-6824.

Norma Jean Boda of Greeley, Colorado died peacefully, surrounded by her family on Sunday, August 30th, 2020 at her home in Greeley. She was 77 years old. She was born on January 28, 1943 in Fulda, Minnesota to Fred and Elizabeth (Bott) Wolf.... View Obituary & Service Information

The family of Norma Jean Boda created this Life Tributes page to make it easy to share your memories.

Send flowers to the Boda family.