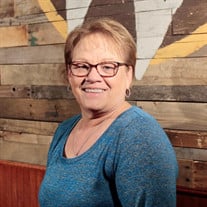 Pamela Ann Welch, 71, of Greeley, Colorado, passed away peacefully on June 1st, 2020 at Northern Colorado Medical Center in Greeley, CO. Pam was born to Elmer and Velma Telitz on February 20th, 1949, in North Platte, Nebraska. There she lived alongside three brothers, one of whom introduced her to his friend Ronald Welch who she quickly fell in love with. After Ron returned from Vietnam, they eloped on September 1st, 1968 in Burlington, CO where Pam wore her favorite bright pink Jackie-O dress, and they rode off into the sunset in their Mercury. Shortly after, they brought their first of three boys into the world; Todd, followed by Kevin and Casey. She worked as a medical receptionist, raised the three rambunctious boys, and in 1982 they finally got the girl they were trying for, Courtney. In 1993, Ron, who worked for the Union Pacific Railroad, was relocated to Greeley, Colorado, where they both lived the rest of their lives. Pam was a perfect mother, grandmother, and friend. She was an Elder at her church, Waypoints Faith Community, where she shared her years of wisdom, an abundance of compassion, and love for gathering together for a meal with anyone and everyone that came through the doors. She regularly cooked and served meals for people facing homelessness at Waypoints Faith Community, and Abundant Life Fellowship, as well as being the Executive Director at The Galley, a 501(c)3 that she founded. She was personally responsible for the serving of 100,000 meals over a 13 year period. She was a fierce believer in the good in people and advocated for people from all walks of life. Her delicious cooking and immaculate baking kept everyone around her well-fed. She had a large extended family that she kept in close contact with. She is survived by her three brothers and their families- Verne (Marne), Gary (Jill), and Gale Telitz; three sons - Todd (Lindy), Kevin (Deb), and Casey (Marta) Welch; one daughter Courtney Welch; five grandchildren - CJ (Mandi) Welch, Ben (Dagny) Welch, Wyatt Hart, Maria Welch and Cristina Welch; and has one Great-Grandchild on the way. She was preceded in death by her parents, Elmer and Velma Telitz; and her husband of nearly 50 years Ronald Welch. Due to the current COVID situation, the family will be waiting to hold a memorial service until later in the Summer. Details will be released when they are available on her Facebook page. In lieu of flowers, we ask that you make any donations to Waypoints Faith Community, a church she loved and served so well. An online guestbook and obituary available at www.moserfuneralservice.com.

The family of Pamela Ann Welch created this Life Tributes page to make it easy to share your memories.

Send flowers to the Welch family.