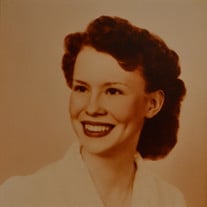 Patricia Ann Harrison (Jensen Bennetts) O’Connor passed away at her son’s home in Eaton the evening of February 25, 2019, with her daughters by her side, after many years of Alzheimer’s disease. She was 82. Patty was born in Denver on May 27, 1936, the only child of Melva Marie Ruby and Lenis Harrison. She adored her maternal grandmother, Loretta Colgan Ruby, and enjoyed spending school vacations at the Colgan and Ruby family farms near Alma, Nebraska, with her aunts and uncles. Patty, her mother, and grandmother lived in a house in downtown Denver for most of her childhood. She would walk to the old department store where her grandmother was a seamstress, or the telephone company where her mother was an operator. Patty was so happy to get married and begin a family of her own, giving birth to David, Steven, Paul, and Julie in Denver. She later married Clyde Odis Bennetts and settled in a farm house near Kersey and gave birth to Kathryn and Rebecca. She was also a devoted step-mother to Chris and R.C. Children were Patty’s world and life and she loved taking care of babies, even operating an in-home day care for a while. Patty was an amazing homemaker, seamstress, baker, cook, hairdresser, farm hand, sheriff deputy’s wife, newspaper deliverer, and nurturer. She baked fresh cinnamon rolls from scratch every Saturday morning, and tape-recorded letters for her children as they left the nest. She was a resourceful and joyous person, a dedicated servant of God and fierce prayer warrior, and above all, an incredibly loving mother who will be deeply missed. After the children left home, Patty worked for a while at Farmland. She became reacquainted with a grade school friend at a reunion and married Leo Noonan O’Connor on February 14, 1997, whom she loved with all her heart. Her family expanded to include his children Joe and Katie, and Patty and Leo embarked on a retirement filled with grandchildren, church, friends, and travel, from her beloved historic home in Eaton. Patty was as fit and strong as a horse until days before her passing and loved to have a half-cream/half-soda drink after an afternoon of gardening. Patty was preceded in death by Leo, who passed away in January 2018, and by Clyde Odis. She is also preceded in death by two grandchildren, Brandy Bennetts (Steve’s) and Mac Bennetts (Chris’). Her survivors include David (Pam) Bennetts of Lakewood and his children Scott (Erin), Brian (Rachel), Danny, Rachel, and Sam; Steven (Heather) Bennetts of Eaton and their children Nick (Neoma) and Emma; Paul (Cindy) Bennetts of Cortez and their children Andy (Crystal) and Amanda (Dave); Julie Cila of Greeley and her children Kellee, Michael (Shelly), and Elizabeth (Paul); Kathryn Bright of Crook and her children Benjamin and Jaqueline; Rebecca (Matt) Youngwirth of Greeley and their children Patrick (Melanie), Joshua (Abbey), Alexander (Jackie), and Hannah; R.C. (Karla) Bennetts of Nebraska and their children Chet (Sarah), Anthony (Lyndsay), Shannyn (Paul), Nathan, Rebekah, Jason, and Luke; Chris (Mary) Bennetts of Arvada and their daughter Molly (Jared), Joseph and Ann O’Connor of Greeley and their children Joey (Jordan), Chelsea (Keri), Cooper, and Maggie; Katie O’Connor of New Orleans; and numerous great-grandchildren. Patty was aided in her final years by many loving helpers, including Nancy, Melissa, Vera, Rick, Shelly, Clark, and Karen, and a kitty named Puppy. Thank you. Services will be held on Sunday, March 3, 2019, at 3:00 at the Eaton Community Center, 1675 3rd Street in Eaton, with a memorial reception and dinner following. Inurnment will be at Mt. Olivet Cemetery in Arvada on March 4, 2019 at 1:00 p.m.

Patricia Ann Harrison (Jensen Bennetts) O&#8217;Connor passed away at her son&#8217;s home in Eaton the evening of February 25, 2019, with her daughters by her side, after many years of Alzheimer&#8217;s disease. She was 82. Patty was born... View Obituary & Service Information

The family of Patricia Ann O'Connor created this Life Tributes page to make it easy to share your memories.

Send flowers to the O'Connor family.