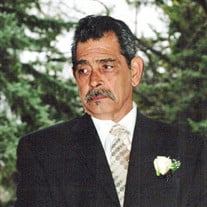 Pedro “Pete” Duran Chavez passed in Greeley, Colorado on April 23rd, 2019. He was born on February 23rd, 1948 in Toyahvale, Texas to Paulo Chavez and Catarina Duran. Pedro enjoyed playing dominoes, dice, gambling, and adored his dog, Frankie. When he would run errands or work around town in his younger years his mother would call him home using Frankie. Catarina would send the dog to look for him and no matter where Pedro was, Frankie would find him and bring him home. He worked for the Chrysler Corporation in Detroit. He often traveled for work and met his wife, Genevieve Martinez, in Lasalle, Colorado. They met at a dance on a Saturday, moved in together that Wednesday and were married six months later on March 27th, 1971. They were married until 2012. He is survived by his children: Rosie Inskeep, Michael Martinez, Ralph Chavez, Catherina Arellano; grandchildren: Christopher, Joseph, Kiegan, Bryan, Myles, Jason, Alicia and Brandon and great grandchildren: Allen, Michael, Davian, Jamison, Corielle, Mathew, Janaya, and Kieran. Pedro was a strong independent person who was determined to find his way through this world. Through every hardship, he persevered and found his way home. He was a loving grandfather to his grandchildren. He was their heart, strength, and inspiration. He left imprints on the lives and hearts of many throughout his life, leaving a lasting legacy. Pedro was a light in the darkness and will continue to bless his loved ones. He will be remembered not only in spirits but in memories that will last forever.

The family of Pedro Duran Chavez created this Life Tributes page to make it easy to share your memories.