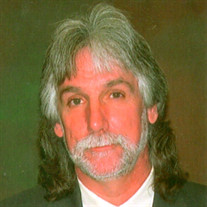 Pete McDonnell, 65, of Greeley died at home on November 10, 2017, after a long, hard-fought battle with ALS. Pete was born on February 24, 1953, to Pete and Betty (Decker) McDonnell, in Greeley, CO. He attended Greeley Central High School. A man of countless skills, he explored many trades, but his two great passions were antiques/collectibles and music. A labor of love, Pete owned and operated McDonnell Refinishing in Greeley during the 80’s and early 90’s. He was an avid, lifetime collector of strange and unique items. Pete will always be known for his great love of music. Starting at the age of 15, he played drums in dozens of local and road bands, including the Starlite Ramblers, Double Shot, and Sh’Bang. In 2005, he joined blues great, Little Milton, and was honored to play in Italy and Switzerland, as well as festivals in Mississippi, Nashville and Milton’s last concert in Maine. Most recently Pete returned to his beloved jazz with The Jane Robinette Quartet. Sadly, ALS robbed him of his ability to play drums, but he never lost his love for the music. Mr. McDonnell is survived by his wife, Michelle Barraclough; former wives, Deborah Estreich and Julia Irrgang; daughters, Liane Gleaves and Jenny McDonnell of Folsom, CA; granddaughters, Ava Gleaves, Sophia Gleaves, and Vayda McDonnell; and many good friends, including best compadres, Paul Gomez and Donn Shuler. He was preceded in death by his father, mother, and brothers, Jim and Pat McDonnell. Services for Pete will be held at 11:00 a.m. on Friday, November 17, 2017 at the Moser Funeral Service Chapel, 3501 S. 11th Avenue in Evans. In lieu of flowers, please make donations to Greeley-Evans District 6. Donations will be given to the district’s music program. An online obituary and guestbook are at www.moserfuneralservice.com

Pete McDonnell, 65, of Greeley died at home on November 10, 2017, after a long, hard-fought battle with ALS. Pete was born on February 24, 1953, to Pete and Betty (Decker) McDonnell, in Greeley, CO. He attended Greeley Central High School.... View Obituary & Service Information

The family of Pete McDonnell created this Life Tributes page to make it easy to share your memories.

Send flowers to the McDonnell family.