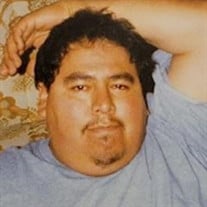 Raymond “Lil Ray” J. Amaya, Jr., 58, of Evans, passed away on Sunday, August 1, 2021, at Porter Adventist Hospital in Denver. He was born January 18, 1963, to Ramon & Dora (Macarenas) Amaya, Sr. in Greeley, Colorado. Ray worked as an auto tech at Kumph Lincoln Mercury in Denver from 1987 until retirement in 1998. Up until his retirement Ray helped his father Ray Sr. (Big Ray) run a towing company and Mechanic shop which started in Kersey and eventually seen its culmination in Greeley. Ray met the love of his life Leo while they were in high school and they enjoyed driving his 1969 Dodge SuperBee which was given to him by his Uncle Rick on Friday nights to get a Kersey burger then Roller Skating and finally ending up on D-Block to cruise and race with all the other kids in the area. In 1980 they had their first son Raymond. They were very young, but Ray did whatever he needed to provide for Leo and their new family. In 1985 they moved to Denver for a new opportunity working in Auto body with Leos Brother-in-law. He worked as a helper around the shop gaining experience until he was able to get a job at Kumpf as a full time Bodyman. In 1991 they welcomed their second son Daniel and life was good as both boys went to school in Sheridan a suburb of Denver. In 1998 Ray became ill with and beat a cancer diagnoses and retired from working. It was at this time Leo went to work for Wal-Mart and still works there today. In 2000 Ray and Leo bought a house in Evans and moved back home where were surrounded by family and loved ones. Ray enjoyed collecting things and was an avid metal recycler. He enjoyed spending time with all his grandkids and even helped take care of Gabby and Abigail when they were little. Ray always loved talking about the old days when he would help Big Ray tow cars and trucks and all the hunting trips he would go on with his dad and Uncle Rick. Ray had a funny sense of humor and he liked to tease and joke with everyone he knew. Even when he was in the hospital, he would make jokes with nurses and doctors making them laugh and smile. Ray was a big man not just in stature but also in his good nature. He cared very deeply for his Father and Mother and loved his family very much. There are no words that can explain how much he loved Leonarda and in his final days he made sure that she knew it. Ray will be missed in a way that most won’t understand, but he will never be forgotten. He is survived by his wife, Leonarda Salas, his parents, Ramon & Dora Amaya, Sr., sons, Raymond (Baby Ray) D. Amaya III and Jess (Daniel) Amaya, brothers, Paul and Steven Amaya and 5 grandchildren. Gabriella Santangelo, Abigail Santangelo-Amaya, Joaquin Amaya, Raven Amaya and Devone Amaya He was preceded in death by his brother, Tim Amaya. Private family services will be held.

The family of Raymond "Ray" J. Amaya Jr. created this Life Tributes page to make it easy to share your memories.

Send flowers to the Amaya family.