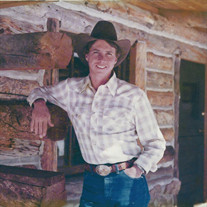 Richard David “Kaycee” Hill, 72, died Saturday March 20, in Antonito, Colorado. He was born March 25, 1948, in Greeley, Colorado to David Denham Hill and Bonnie Lou Hill. Richard graduated from elementary school in and from Central High School in Cheyenne, Wyoming. Richard became the first of his parents five children to graduate from college with a Bachelor of Science in Political Science from the University of Wyoming. After graduation, he thought of becoming an attorney, but his creative skills took him in a different direction. His carpentry skills and love of western attire led him to build a long-term business, the trademarked Hat Jack, where he globally and proudly sold Made in USA hat stretchers to his extensive and loyal customers. Richard had many interests, an amazing sense of humor and wit, and love of life. Among those dearest to him was his enormous ability to play the guitar (self-taught). From his High School band, The Spirits, to playing and singing to his granddaughters, he was a gifted guitar player and vocalist. He was invited to play at several venues wherever he went: in Colorado playing with Dusty Drapes and Asleep at the Wheel, Arizona, Santa Fe, and the Hilton in Hawaii. He recorded and produced a CD for two of the Asleep at the Wheel as well as his own. To this day, his works stand the test of time. While in Nashville, Roy Akuff, The King of Country Music, called him the “original country bumpkin” and a “great musician.” He had enormous God given talent. Richard also had great passion for the outdoors, specifically fly fishing, at a young age and throughout his entire life and loved to teach his family and friends the proper art of fly fishing. He also had a great love for animals. He had amazing talent in creating anything of interest. He was a custom home builder and carpenter - he not only built and designed them but could build all the furniture in them. He was a leather craftsman who designed and sewed western style clothing and upholstered leather furniture. He had a love of antiques and an ability to acquire them and perfectly display them as well. He loved anything that deserved to be in history. During his college years, he loved to build and race motorcycles. Later he would build a one-of-a-kind Harley and tinkered with antique Ford trucks. He held true talents, not owned my many. Richard was a beloved grandpa, son, brother, brother-in-law, uncle, friend, and husband. He is survived by his son Timothy David Hill and Tim’s wife Penny; daughter Karen Kay Pratt and Karen’s husband David both from his first marriage to Alice Margaret “Sally” Hill; his second wife Susan Shadek Mesak; his 5 grandchildren Morgan James Hill, Taylor Nicole Hill, Randy Michele Hill, Skylah June Pratt and Alainah Healey Pratt; 1 great-grandchild; his brother, Michael Andrew Hill and wife Mary of Georgetown, Mass.; two sisters, Kathleen Anne Hill of Eaton and Joan Hill Omansiek and husband Walter of Lake Helen, Fla.; niece Brittany Hill Becker; nephews Corey Christopher Hill, Brandon Michael Hill, Justin Emile Hill, David James Hill, Brian Ross Pinelli, and Damien Hill Marandet. He was preceded in death by his grandmother Kathleen Reeman Waldron, his mother, Bonnie Lou Zike Hill, his father David Denham Hill, and his brother Glen Everett “Sticks” Hill. Memorial services will be held at the Eaton, Colorado Cemetery on Saturday, June 19, at 10:30am. His ashes will be buried with his beloved mother, Bonnie.

The family of Richard David "Kaycee" Hill created this Life Tributes page to make it easy to share your memories.