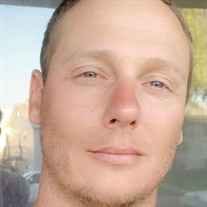 Richard Michael Holt, 36, of Fort Morgan, passed away on Sunday, January 17, 2021 at his home. He was born September 11, 1984 to Terry L. & Kathryn D. (Turner) Holt in McKinney, Texas. He moved to Fort Morgan in February 2020. On November 12, 2020, he married Jennifer Groves-Leech. Richard worked as a flowback supervisor for RP Services. He enjoyed fishing, and the Dallas Cowboys, but he loved spending as much time as he could with his family. He is survived by his wife, Jennifer Groves-Leech of Fort Morgan, his stepsons, Brantley & Kyler Leech, daughters, Emmalynn Faith of Arkansas and Guiliana Grace of Texas, his brother, Shawn Self of Texas, sisters, Sherry (Rueben) Frye and their children, and Bonnie (Dustyn) Baughman and their children all of Texas. He was preceded in death by his parents, Terry & Kathryn Holt. A memorial service for Richard will be February 7, 2021, 11:00 a.m. - 2:oo p.m. at 19592 East 8th Avenue, Fort Morgan, Colorado 80701.

The family of Richard Michael Holt created this Life Tributes page to make it easy to share your memories.

Richard Michael Holt, 36, of Fort Morgan, passed away on Sunday,...

Send flowers to the Holt family.