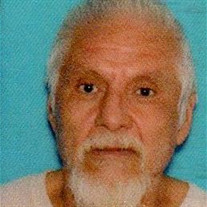 Richard Joseph Torrez, 67, passed away on Monday, May 21, 2018 in Greeley, Colorado surrounded by his family. Richard was born on May 4, 1951 in Denver, Colorado to Arthur David “Ruben” and Theresa (Garcia) Torrez, Sr. The family moved to Ault, where he graduated from Highland High School. Shortly after, Richard met the love of his life, Shirley Ann Trujillo, and they were married in Greeley by the county judge on January 27, 1969. Together, Richard and Shirley lived in Greeley and raised a family, a son, Richard, and two daughters, Loretta and Emily. Richard owned the 11th Avenue Tire Shop for many years. Besides working and spending time with his family, one of his true passions was working on and building motorcycles from scratch. He loved to ride the finished product around town, and often wasn’t seen without his motorcycle. Richard was also passionate about fitness and was known for weight lifting and keeping himself in good shape. When he wasn’t working out and fixing bikes, he loved to fish, and made many beautiful memories sharing that hobby with his children and grandchildren. Every Sunday, Richard would be found watching his favorite team, the Denver Broncos. He always had a book in his hand, being very fond of reading. Family meant everything to Richard, and he was proud to be a grandfather, but he always wanted to be a great-grandfather, so he cherished his two beautiful great-grandchildren, Ramon Pinon, Jr. and Olivia Espinosa. He always enjoyed long walks with his granddaughter, Carolina Torrez. He is preceded in death by his parents, Ruben and Theresa Torrez, Sr.; his grandparents, Anselmo and Barbara Rael Garcia; a daughter, Theresa Torrez; and a son, James Torrez. Richard is survived by his loving wife, Shirley Torrez of Greeley; his son, Richard Torrez of Greeley; daughters, Loretta Gallegos and Emily Torrez King, both of Greeley; two brothers, Ruben Torrez of California and Anselmo Torrez of Las Cruces, New Mexico; two sisters, Mercedes Auger of Cary, North Carolina and Marcella Torrez of Denver; fourteen grandchildren; and two great-grandchildren. A visitation will be held from 2:00 p.m. - 5:00 p.m., Thursday, May 31, 2018 at the Moser Funeral Service Chapel, 3501 S. 11th Avenue in Evans.

The family of Richard Joseph Torrez created this Life Tributes page to make it easy to share your memories.

Send flowers to the Torrez family.