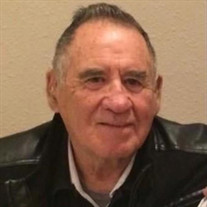 Rigoberto Delrio Garza, 85, of Platteville, CO passed away peacefully at his home on October 19, 2021 surrounded by his family. He was born in Menard, TX on October 18, 1936. One of 11 children to Manuel and Sara (Delrio) Garza. In Rigo’s early years, he enjoyed swimming, running, and fishing. He was happy being outdoors. He always loved a good BBQ. As a young man, Rigo worked as a traveling migrant. He was also a skilled sheep shearer. In 1961, he married Josie Navarrete and had 7 children. He was a member of the Platteville Lions Club, a coach of the Platteville Amigos, the Big Mamas, and the Platteville A’s. In 1976, Garza Conoco was established to service the residents of Platteville and closed in 1986. He later remarried to share 29 years with his second wife Eva (Norris) Garza. Rigo spent many years alongside his brother’s in the construction industry. Upon his retirement, he enjoyed spending quality time with family. He especially loved teaching his grandchildren all of his knowledge in sports, mechanics, math, welding, and life skills. He is survived by his 3 siblings; Manuel Garza (Elvira) , Daniel Garza (Rachel), and Linda Duarte (Rene); 6 children; Rigo Jr Garza of Platteville, Angelina Alarcon (Armando) of Fort Lupton, Annette Garza of Platteville, Amanda Lira (Francisco) of Platteville, Ronny Garza of Platteville, and Roman Garza (ChauVanna) of Evans; 21 cherished grandchildren and 26 great-grandchildren. He also leaves behind his beloved dog, Cricket, Truly his faithful companion. Rigo was proceeded by his wife, Eva Garza, his parents Manuel and Sara Garza. his son, Robby Garza, four brothers, Antonio, Alfred, Salvador, and Joe Garza. Along with his three sisters, Sadie Pena, Anita Garza, and Estalla Cervantez. Recitation of the Rosary will begin at 10:00 a.m., Friday, November 5, 2021, followed by Funeral Service at 11:00 a.m. at St. Nicholas Catholic Church, 520 Marion Ave, Platteville, CO. Interment at Mizpah Cemetery, Platteville CO. Immediately followed by a Post-funeral reception at St. Nicholas Parish Hall.

The family of Rigoberto Delrio Garza created this Life Tributes page to make it easy to share your memories.

Send flowers to the Garza family.