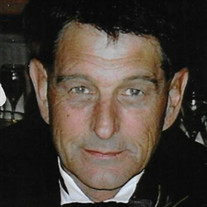 Robert ‘Bob’ Anderson, cherished husband, father, grandfather and friend, passed away suddenly on May 6, 2021 in Greeley - where he was born on January 24, 1950 to Virginia and Ray Anderson. He was 71 years old. Bob grew up on a dairy by Galeton and spent most of his childhood working with his father and uncle learning the ropes of the farm. While feeding calves and milking were ‘his job’, he loved helping his Mom around the yard and house, particularly in the kitchen making her famous chocolate cake where together, they were known to ’test' a fair amount of batter before getting it in the oven. He also enjoyed playing outside with his older sister, and as a lifelong lover of dogs, they were usually joined by his canine friends - two of his favorites were Pudgy and Tuffy. After graduating, Bob married his high school sweetheart, Sandra Donaldson, on October 15, 1971. They settled on the family farm, purchased the land and dairy operation from his father, and thus began his life-long journey of being surrounded by women. Nikki was born in 1974, followed by Lisa in 1977 and Jodi in 1979. Bob viewed the farm as his responsibility, but his main priority in life was his family. He excelled as a dairy farmer and earned numerous awards for milk quality and production, but his main focus was always on Sandra and his girls. He cherished following their activities in school and sports and almost never missed an event; he was a routine fixture atop the Eaton High School gymnasium with his RCA camcorder in hand. It was an added bonus when his beloved granddaughters entered the mix - and he had a new generation of activities to follow and advice to dispense, whether it was requested or not. Bob was diagnosed with a rare eye condition that would slowly diminish his eyesight in 2003. He was able to farm for just over nine years until it forced his retirement in 2012. He and Sandy moved to Greeley where they enjoyed the ’town life’ and a much slower pace. Bob often joked that retirement brought about a welcome change - he no longer had to argue with a neighbor about ‘water'. He loved spending the extra time with his family, painting and drawing, and he was an active member of the Weld County Democrats. Most recently, he celebrated the long-awaited arrival of a great grandson - in his words ‘You know I love my girls, but I knew someday we would get a boy.’ Bob was a dimensional man - on the exterior he was generally seen as a tough, hardened farmer, but he was also an intense person, a seeker of information and knowledge. While he was compassionate and genuinely interested in connecting with others, he was a simple man who loved his family. However, his best achievement in life was his enduring love of Sandra. For over 50 years they were inseparable - they were the best of friends, partners in everything, and his love for her was something he never could quite define. Bob is survived by his loving family - wife Sandra, daughters Nikki (Greg) Michalik, Lisa (Lucas) Burton, Jodi Anderson, granddaughters Lauryn (Justin) Wert, Shavaun Michalik (fiance Ryan Rahm), Lilly Kaberline, great grandson Carter Wert, mother Virginia Anderson, sister Ginny (Jim) Taylor, uncle Earl Anderson, and many cousins, nieces, and nephews. He was preceded in death by his father Ray Anderson. In lieu of flowers, donations can be made in Bob’s name to the Curtis Strong Center for the Visually Impaired, in care of Moser Funeral Home, 3501 11th Avenue, Evans, CO 80620. A private family memorial service will be held at Moser Funeral Service Chapel.

The family of Robert "Bob" Anderson created this Life Tributes page to make it easy to share your memories.

Send flowers to the Anderson family.