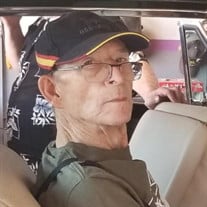 Robert Anthony “Bob” Arnold, 83, of Evans, passed away on Sunday, November 22, 2020 at his home surrounded by family. He was born on October 1, 1937 in Niobrara County, Nebraska to Merle Homer and Melinda Esther (Darling) Arnold. Mr. Arnold married Shirley Mae Cornwell on November 7, 1955. She preceded him in death on September 17, 1998. He later married Donna Kay Petty on April 29, 2000. He worked for American Variseal and he retired in 2001. Bob was a member of Faith Bible Baptist Church for 11 years and previously Northwest Friends Church. His hobbies include car restoration, camping and home renovations. Survivors include his wife, Donna Arnold of Evans; 2 sons, Robert Arnold and wife Shelley & James Arnold; 2 daughters, Deborah Thompson and Ruth Hanes and husband Tom; 2 step sons, Tim Greer and Mark Greer and wife Elisa; 9 grandchildren and 4 great grandchildren. In addition to his wife, Shirley Mae Arnold, he was preceded in death by his parents, Merle and Esther Arnold; 2 brothers, Merle Jr. and Edwin; 3 sisters, Dorothy, Joan and Ruth and a stepdaughter, Tiffany Greer. A funeral service to celebrate Bob’s life will be held at 11:00 a.m. on Monday, November 30, 2020 at the Faith Bible Baptist Church, 320 35th Avenue in Greeley. Interment Arvada Cemetery. Visitation will be from 10:00 a.m. until time of service on Monday at the church.

The family of Robert "Bob" Anthony Arnold created this Life Tributes page to make it easy to share your memories.

Send flowers to the Arnold family.