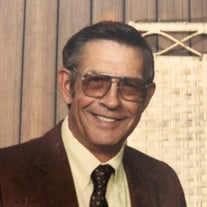 Robert “Bob” Alton Connell, 85 of Eaton, passed away on Friday, June 15, 2018 at Bonell Good Samaritan Center. He was born January 13, 1933 to Ivan & Mable (Jamison) Connell in Quinter, Kansas. He graduated from Boulder High School in 1951 and went on to attend Western College of Auctioneering from which he graduated in 1967. He married Donna Akins at Lake Tahoe on August 20, 1975. He was a man of many talents and was self-employed at many different businesses including, a pinball business, cattle business and a machinery business. Bob owned and operated SeaTac Flea Market and auction from 1967-1969 and then started Connell’s Antique Auction in late 1969 in Federal Way, Washington. In 1975, Bob moved back to Kersey, Colorado and continued Connell’s Antique Auction in Ault, Colorado until the late 1980’s. He enjoyed working with stained glass, fishing, his 1969 Harley Electra Glide, and collecting farm toys. He had his pilot’s license and enjoyed flying. Bob had a great sense of humor and was a wonderful story teller. Boy, could he tell a story! He is survived by his wife, Donna Connell of Eaton, Colorado, sons, Kenneth (Vicky) Connell of Fort Collins, Kendall (Ruth) Merritt of Purcelville, Virginia, a brother, Edwin Connell, 3 grandchildren, Jason and Andy Connell and Riley Merritt and 5 great grandchildren, Logan, Lucy, Brooke, Kayla, and Jacob Connell. He was preceded by his parents, Ivan & Mable Connell, a daughter, Gayle Connell, and a brother Charles Connell. A celebration of Bob’s life will be held at 1:00 p.m. on Saturday, June 23, 2018 at the Evangelical Free Church of Eaton, 1325 3rd Street, in Eaton. In lieu of flowers, memorial gifts may be made to the Evangelical Free Church of Eaton in care of Moser Funeral Service, 3501 S. 11th Avenue, Evans, Colorado 80620. An online obituary and guestbook are available at www.moserfuneralservice.com.

The family of Robert "Bob" A. Connell created this Life Tributes page to make it easy to share your memories.

Send flowers to the Connell family.