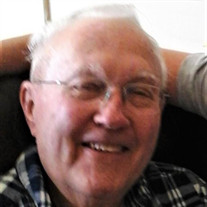 It is with great sadness that we wish to announce the passing of Robert K. “Bob” McConville, 87, of Greeley, on Wednesday, August 18, 2021, at Grace Pointe Senior Care. He was born February 9, 1934, to Austin J. & Ruth B (Johnson) McConville in Greeley, Colorado. He attended Greeley schools and then enlisted in the U.S. Navy in 1951, serving 3 active tours in Korea. He went on to work for Home Light & Power from 1955 until his retirement in 1994 as a substation foreman. On October 26, 1958, he married Beverly Schmunk. Bob was baptized in the Lutheran Church. He was a member of Destination Unknown for 30 years. He enjoyed taking cruises and seeing Ireland, tracing his roots back several generations. He and Bev had a cabin at Crystal Lake where he enjoyed fishing and relaxing. He is survived by his wife, Beverly, his son, Michael (Chris Maestas) McConville, his daughters, Kelli (Tom Hampton) Kubik and Colleen McConville, 4 grandsons and 3 great grandchildren. He was preceded in death by his parents, Mac & Ruth, his brothers, Austin & Alfred McConville, his father-in-law, Jake Schmunk, and mother-in-law, Mollie Schmunk. The family would like to give special thanks to the staff at Grace Pointe Senior Care for their loving and gracious care of Bob during his stay there. Graveside inurnment will be 1:00 p.m. on Tuesday, August 24, 2021, at Sunset Memorial Gardens. A celebration of Bob’s life will follow at 2:00 p.m. also on Tuesday at the Moser Funeral Service Chapel, 3501 S. 11th Avenue in Evans, Colorado. In lieu of flowers, donations may be made to Pathways Hospice in care of Moser Funeral Service.

The family of Robert "Bob" K. McConville created this Life Tributes page to make it easy to share your memories.

It is with great sadness that we wish to announce the passing...

Send flowers to the McConville family.