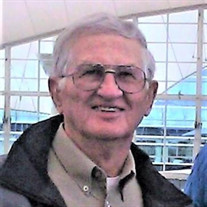 Robert F. "Bob” Motis was born 18 June 1939 in Sterling, CO to John and Lillian (Peterka) Motis. Bob was a graduate of Yuma Union High School, the University of Northern Colorado and obtained his Master of Arts/Education at the University of Nebraska, Kearney. He married Margie Offerman of Fort Collins, CO in December 1963. Bob grew up in NE Colorado and during the summers he worked for his Uncle Rudy Motis on his ranch near New Raymer, CO. He continued working there through his college years where he learned about hard work, dedication and commitment to doing a job well. Bob was a high school business teacher in Leadville, CO as well as their basketball and football coach. After his retirement he substitute taught in Weld County. He was a 50 + year member of the Elks Club. Bob loved all sports and especially elk hunting and gardening. His best times were spent with his grandchildren, his family and friends. His ready smile and humor were his special traits. Bob’s belief in Jesus was strong and he was quoted saying “God is the quarterback – I just run the plays that he tells me.” He is survived by his spouse, Margie of 58 years, son, Tim Motis of Fairbanks, AK, daughters Chris Kerr of Westminster, CO and Janice Motis of Brighton, CO. Brothers, Dan Motis of Greeley, CO, C.R. "Clay" Motis of Star, ID, and Deane Motis of Edmunds, WA, and sister, Mary Ann Ritz of Littleton, CO. His grandchildren Jonathan Jester of Virginia, Anna Marie Motis of Oregon, Dustin Kerr of California, Aaron Motis a cadet at the Coast Guard Academy in CT, Sydney Kerr a student at South Dakota School of Mines, Jeneva, Jenessa, Jenae, and Charlie Motis all of Alaska, and 2 great grandchildren, Eleanor and Molly Jester of Virginia. He was preceded in death by his parents, John & Lillian Motis. Recitation of the Rosary will be held at 10:30 a.m. Thursday, July 22, 2021, with a Mass of Christian Burial following at 11:00 a.m. at St. Mary Catholic Church, 2222 23rd Avenue in Greeley, Colorado. An online guestbook and obituary available at www.moserfuneralservice.com.

Robert F. "Bob&#8221; Motis was born 18 June 1939 in Sterling, CO to John and Lillian (Peterka) Motis. Bob was a graduate of Yuma Union High School, the University of Northern Colorado and obtained his Master of Arts/Education at the University... View Obituary & Service Information

The family of Robert "Bob" Francis Motis created this Life Tributes page to make it easy to share your memories.

Send flowers to the Motis family.